ALLi’s roving reporter with a camera, David Penny, brings you the happening people and events creating buzz for indie authors this year at Frankfurt Book Fair.

Before I came to Frankfurt I had heard it was the least author friendly book fair in the world. As my train pulled into Frankfurt central station I fell into a brief conversation with a fellow passenger who had been on the same journey from London. She was an agent and asked why on earth I was there, because “Frankfurt is no place for authors.” Well, I was about to find out if this was true or not.

Frankfurt is the largest book fair in the world in terms of trade stands, and the second largest (after BEA) in terms of visitor numbers, so it must have something going for it. And what I discovered it has going for it is business, with a capital $, £, €…

I’m going to attempt, and possibly fail, to offer you a snapshot of what it’s like to be there, and what happens throughout the over twelve halls that encompass the wonder that is Frankfurt Book Fair. You’ll see short videos, a lot of pictures, some interviews, and some thoughts. 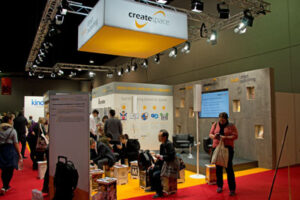 Indie Authors will find the self publishing and self published author stands, together with the Kindle and Amazon imprint stand, all situated in one small area. This year it was in the corner of Hall 3, which is itself a ten minutes walk from the main area concentrated around the three floors of Halls 5 and 6.

It is possible that come Saturday when members of the public are admitted and Orna Ross does her talk with Porter Anderson, this area will become a hive of activity. But on the first morning it all felt rather like an afterthought. It reinforced my impression that Frankfurt Book Fair is not a place to come on a casual visit. If you have an agent or a traditional publishing deal matters may be different, but even then most authors are sidelined. Agents come here to strike deals for distribution, translation and rights. Authors are a by-product, not centre stage. 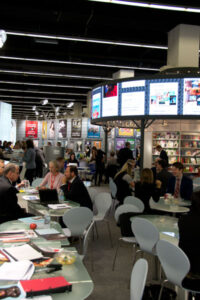 The Harper Collins Stand in Hall 4.2

While I was at the show several messages came in from people saying they wished they were here and looked forward to attending in the future. You are welcome to do so, but a warning: This event is not for the casual wanderer, and it is not for the author in search of a book deal or an agent. If you arrive on spec you will probably get to speak with no-one. Prepare, organise, get appointments. But having said all of that Frankfurt is, above everything, a place where deals are done, sometimes big deals.

The size of the stands taken by the big publishing companies is evidence of how much money still remains in the business — and perhaps also of where the majority of that money goes to. The Harper Collins stand was the largest I saw, and included a high level mezzanine area I assume you only got access to if you were George RR Martin or another of their star names. However, the other stands from the major publishing houses were also impressive, and I started to sweat just thinking about the work that must have gone into transporting and erecting them for the show.

I was lucky enough to get to meet with Jef Van der Avoort of Squirl (which isn’t short for Squirrel, but is in fact the word for the curly bits on handwriting). Jef told me that Squirl are the only company he knows who are working on a new method for people to find books to read. He explained that the problem is that in this day and age there is a tidal wave of content, making it difficult for a book or an author to stand out from the crowd of millions. 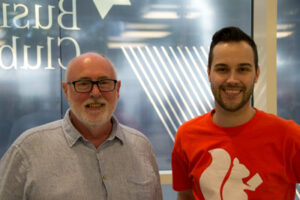 Jef said when he came up with the concept of Squirl it was difficult to explain, and people didn’t get it until Pokemon Go came along. Now all he has to say is that Squirl is Pokemon Go for Books and everyone immediately understands. So – what exactly does Squirl do?

Squirl allows publishers and authors to upload details of their books, and then create links to physical places throughout the world. Readers download the free Squirl app to their phones, and if they are in London and pass Baker Street, the app pings and says “Hey – this is where Sherlock Holmes lived.” They are then given a list of up to three books associated with that area.

The more Jef explained the concept the better it sounded. I’ve already signed up, which is free for authors, although there are enhanced services if you want to use them, and uploaded my books set in Granada and Cordoba in Spain. So now when English speakers (you can specify language as well) roam the Alhambra palace they will get a ping and my Historical Mysteries will appear as if by magic.

As I said, Jef believes Squirl is the only company in this area right now. Personally, I love the idea both as an author and a reader, and can’t wait to see how it develops.

It is no doubt the same at London Book Fair and Book Expo America, but the very nature of Frankfurt means there are a plethora of stands, both large and small, from all over the world. From places you would never think of when you consider the publication of books. It was humbling in the extreme to see the fantastic work that is going on in so many of these places.

Sometimes the stands were utilitarian, sometimes they were works of art, like that of Columbia. What I was pleased discover however is that for some of these smaller places the Book Fair subsidises their presence. If it did not do so this wondrous diversity would be missing and the Fair would be less rich as a result.

Click on the video segment below to hear a short interview with one of these publishers (in this case from Zimbabwe), and to see how many different places I discovered — and remember that these are just the ones I had time to search out.

Another thing I discovered while touring the show was the number of alternate eReaders available in the international market. For instance in Germany the primary eReading device is the Tolino, a neat looking reader created initially for the German market. Interestingly if you live in the UK or US and click on the link to their website you will discover the device is not available for sale here. Tolino weren’t the only alternate reader at the show but, being German produced, was the most visible with devices being shown on several stands.

The hours of business… and then the real business starts…

Most stands were busy all day long striking deals, taking meetings, and networking, but around 5pm the atmosphere suddenly changed. Bottles of wine were uncorked. Canapes were laid on white tablecloths where previously deals had been negotiated, and a party atmosphere ensued. But that doesn’t mean it’s party time. Oh no. Instead this is where the serious negotiations get done — offline. Invitations to lunches and dinners come thick and fast and handshakes and air kisses exchanged, reinforcing the idea that this is a serious business.

And thank you to Ingram for my invite to your party – the red wine was much appreciated, but I wasn’t so sure about the little sausages.

Here are two of the favourite things I found at the show. They’re not the most impressive or the biggest but I loved each of them in its own way. One of them wasn’t even part of the Book Fair directly, but I’ll come to that. 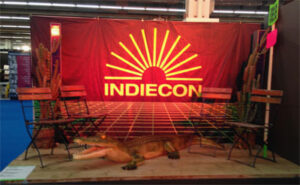 Indiecon – watch out for those teeth!

The Indiecon stand would, I hope, have brought a smile to any Indie Author. Indiecon is a rallying point for print publishing’s rare breeds: witty fanzines, savvy art journals and ambitious magazine innovators.

Manned by a disparate group of hipsters and plain out and out weirdos, their reason for being there was to promote a whole series of Indie magazines they produce. One is dedicated to articles and pictures of men with ginger hair and nothing else – no blondes or brunettes allowed, and certainly no bald eagles such as myself. Another magazine is dedicated to the production of images and text for a single street in a single city. Around 20-30 streets worldwide are features in each issue. The Indiecon people reinforced for me that even in a show as business oriented as Frankfurt Book Fair there is a place for such outliers of the publishing world. 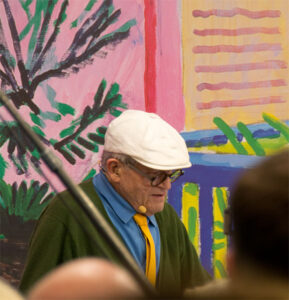 A glimpse of David Hockney

While wandering Hall 4 I discovered there was an Arts festival running alongside the Book Fair, and a sign saying “Come and meet David Hockney, 2:30 today!”. So I did. Well… I didn’t actually get to meet him. In fact, I barely got to see him because the crowd was huge and every single person had their phone raised above their head trying to get a picture. He spoke for over an hour about his new book which contains images of some of his art, and which sells in excess of £1,000! He also made an appearance during the opening of the show itself.

So anyway, I did get to be kind of in the presence of the great man and did, eventually, manage to get a picture.

So should you go?

The Frankfurt Book Fair is one of those rites of passage many authors believe they need to pass through to achieve a measure of acceptance. And if you truly wish to experience this event, then please arrange to go there. It is something you will never forget. But if you do bear in mind that this venue is barely tolerant of authors, and even less tolerant of Indie Authors.

If you intend to visit any large book fair, always go with an intention in mind so you know why you are going to be there, then use that intention to plan your visit so you get to see everything you need to without spending an age wandering halls looking lost.

If you are going to record interviews and sound bites take a device that doesn’t switch itself on every time you pop it back in your pocket. I have some wonderful recordings of background noise. Fortunately I also have some great interviews, not all of which made it to this post.

Click here to find out more about David Penny