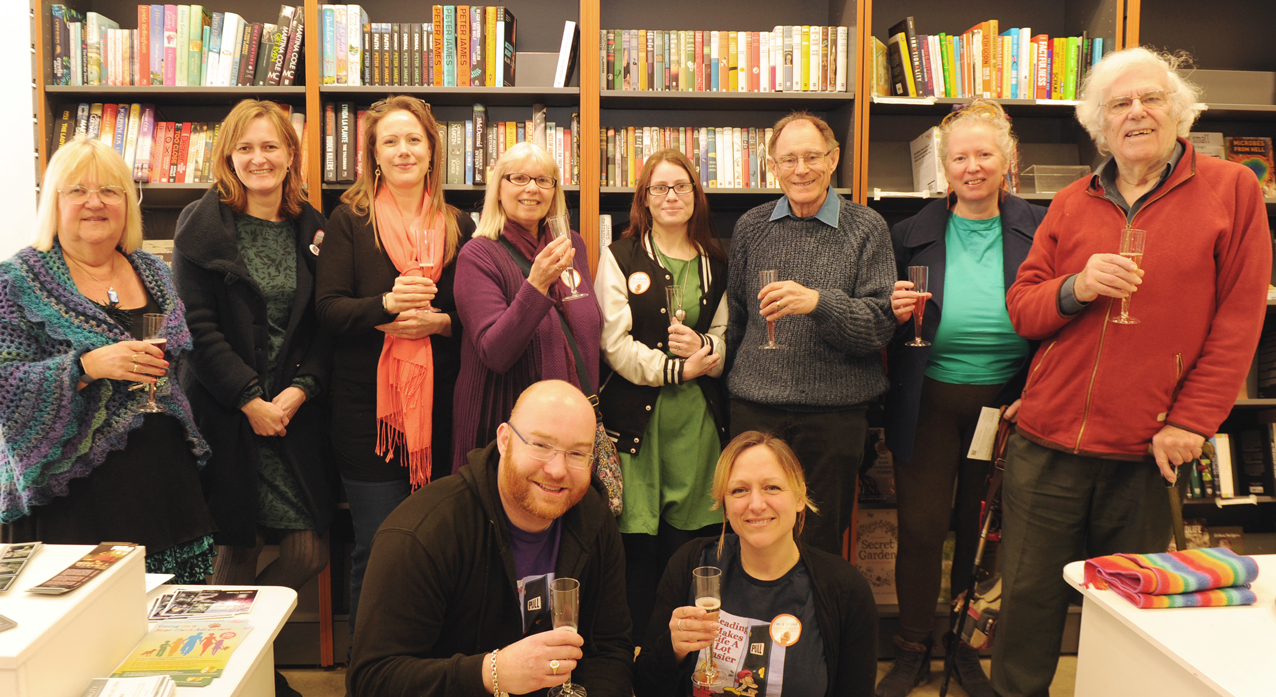 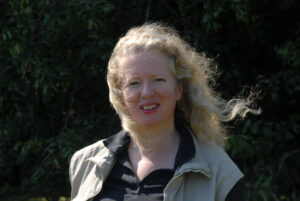 So many of our posts about book distribution focus on reaching readers online, so it's refreshing to be able to share a case study today of a new physical bookstore opening that not only accepts books from indie authors but is going out of its way to attract readers to the indie sector. Amanda Davey was one of a team of ALLi author members who responded to Book Potato‘s call to supply their self-published books to be stocked from their opening day, and she reports now from the store's launch event. 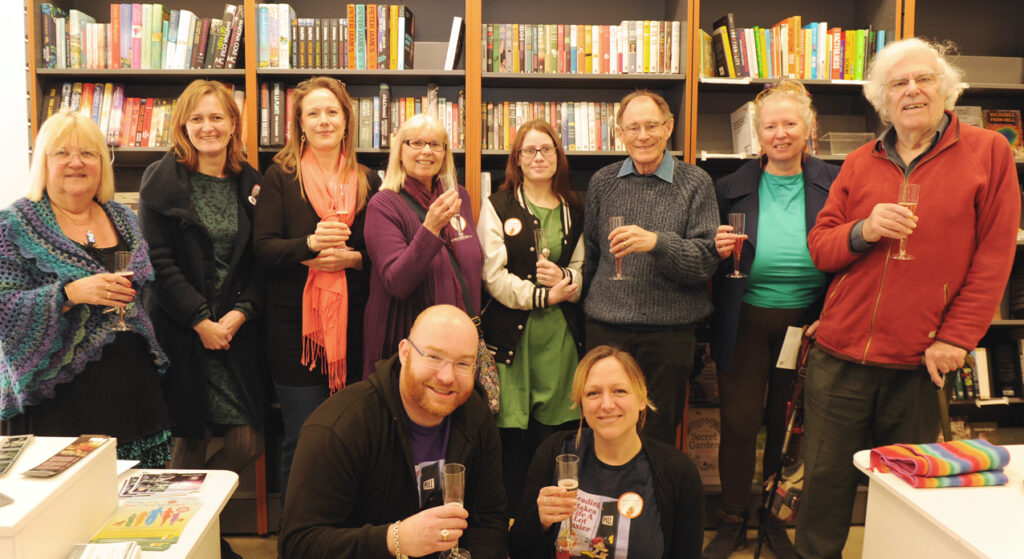 On Thursday 28th March, a call-out came through ALLi's members-only Facebook forum from a new bookshop, Book Potato,  due to open in Leatherhead, in the UK, the following Wednesday.  The proprietors, Carrie and Tom, invited indie authors to submit manuscripts for quality control and, on approval, to send 10 copies of the approved books to support the launch of the new bookshop. Such short notice was tight for time, but the project was intriguing, and the idea of a new bookshop stocking significant numbers of books written by indie authors was one to be embraced and encouraged. The retail climate is stressed, and new independent bookshops need an edge to succeed and compete with the larger corporate outlets. 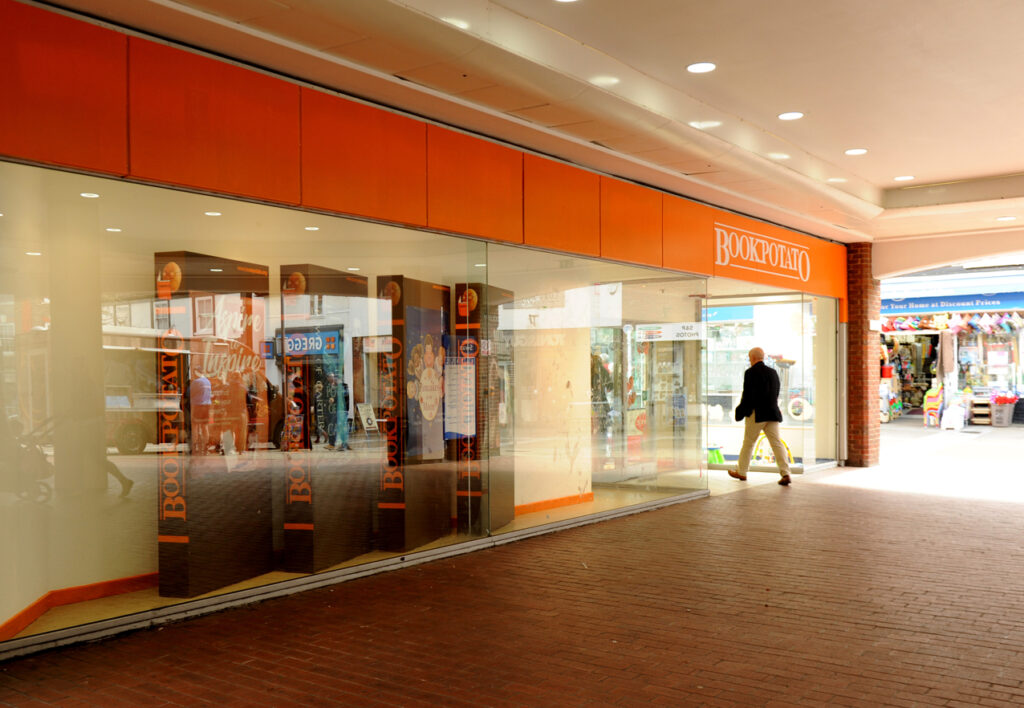 I sent off an email saying we’d be in Leatherhead area the following day (a fortuitous re-arranged appointment), and asking whether they would be interested in non-fiction as well as fiction. An enthusiastic and warm email came by return, and as a result we took 10 copies of one book and seven of another into the shop on the Friday.

We found Carrie and Tom with huge grins on their faces surrounded by bookshelves and paint. A friend was painting an open book in the staircase going down to the soon-to-be coffee area, where they will also stock secondhand books.

We had a very positive chat with Carrie and Tom about their aspirations for supporting independent authors and running book launches and events with that in mind. They still had a great deal to do in preparation for the opening on the Wednesday. The air smelled of varnish mixed with paint.

Sue Wickstead was able to visit the shop on Saturday and was greeted in exactly the same warm and cheerful way.

At the launch, performed by the Mayor in his gold chain with a pair of gold scissors, a good number of ALLi members were present with copies of their books, including Sue Wickstead, Kate Cunningham, Leonora Meriel, Patricia M Osborne, Willow Woods, Trevor Stubbs, Glyn Harper and Amanda (and Simon) Davey.

Here is what some of them had to say about their first impressions of Book Potato:

“The launch was awesome and it was great to meet other authors and members of ALLi. I think it is a great idea what they're doing for indie authors. I also love how they're promoting indie authors as much as traditional and working closely with us. The shelf space is great, and they're not hiding indie books away – you see them almost as soon as you walk in! Both Carrie and Tom are really friendly and you can see they are genuinely passionate about what they're doing so I hope this goes well for them!” – Willow Woods

“I think the question should not be how likely are we to sell books there as whether we support their idea of making a point of selling indie books. It would promote the whole indie author movement and help overturn the popular idea that self-publishing means vanity publishing. BookPotato's shelves need to be full if they are going to be successful at all and the more indie authors send their works the better. I think they are brave in the present climate, but to have a reputation as an ‘alternative bookshop' that aims to undercut Amazon will have a great appeal. It's feel is a bit like the small eco-friendly stores on the high street which sell stuff you can't get in the supermarkets.” – Trevor Stubbs

“It is a great place for indie writers to showcase their work. What lovely people Tom and Carrie are – so supportive and easy to deal with. Communicative. They've just posted on Twitter with a photo to show me that they sold a copy of my book this morning – I think that is really kind of them. The shop is in a nice shopping centre and on the corner, easy to get to from the car park. A young business team with plenty of enthusiasm.” – Patricia M Osborne

“It is so great to have a real indie bookshop that supports indie authors. Carrie and Tom have worked hard.” – Sue Wickstead

Although there was still work to be done on the shop, Carrie and Tom continued to be warm and engaging. Their energy was infectious. They had arranged a photographer who took photographs of us all with our books, as well as a group shot. Fresh chocolate was available and some special looking cakes. Another high point was the visit of Peter Snell of the former Barton’s Bookshop in Leatherhead, giving his support and guidance. 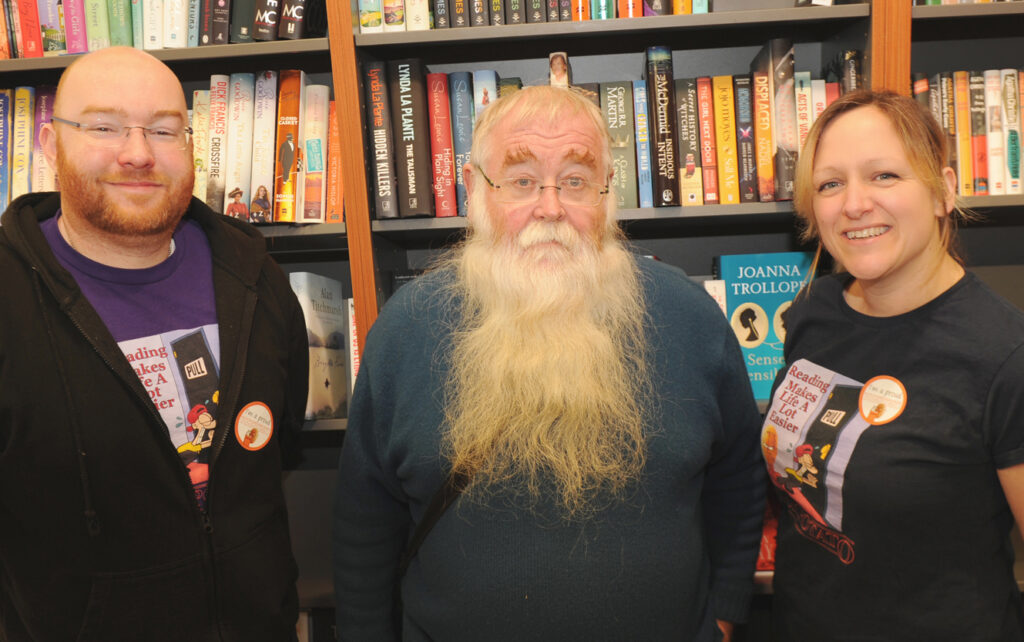 The legendary bookseller Peter Snell, recently retired from Barton's Bookshop, is generously sharing his experience and expertise with Tom and Carrie (Photo: www.sonrisaphotography.co.uk)

Rising to the Retail Challenge

The national retail environment is seriously challenged, and retailers need extra work to be able to succeed. The bookshop is being laid out with this in mind. To the right of the entrance (oddly a sliding door) is an area for children to play, out of the way of feet. There are plans for book launches and talks. The coffee area will have cakes, although no baked potatoes for now.

ALLi members can benefit the whole indie community by supporting this venture. To have this level of support for the indie author is important to us all, and a warm and open environment for books to be sold in is definitely in keeping with the ALLi mission. 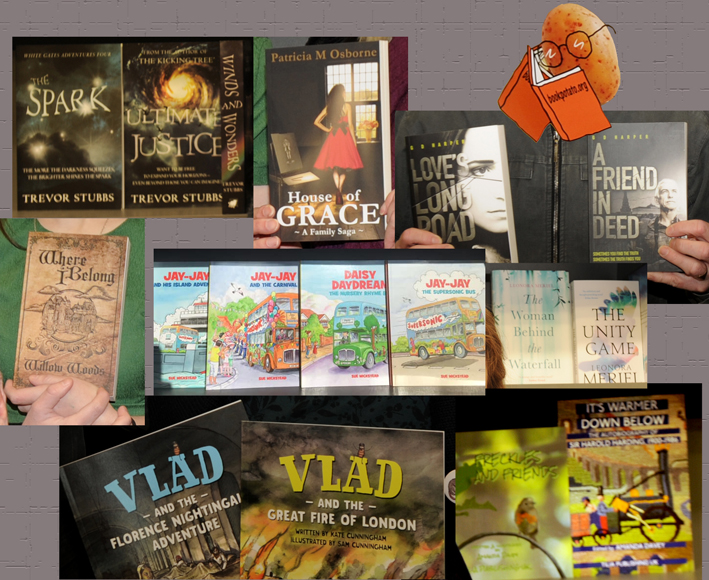 OVER TO YOU If you know of a local independent bookstore near you that is championing indie authors, as Book Potato are doing, we'd love to hear about it!

#ALLi #indieauthors celebrate the launch of a new bookstore championing indie authors - an inspiring story about @BookPotato3 in #Leatherhead. Click To Tweet

Amanda Davey has been publishing her own books (and greeting cards) since 2015, with the help of her husband Simon Davey. Between them they have five books through different publishing paths and she is a dedicated fan of the self-publishing process. A voracious reader as a child, her books have a low-key biographical thread, including "Freckles and Friends", effectively the biography of a young robin, his companions and his garden.
www.tiliapublishinguk.co.uk