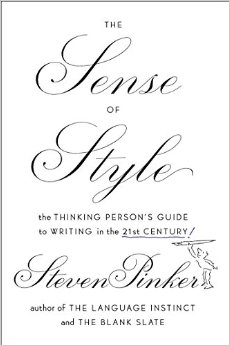 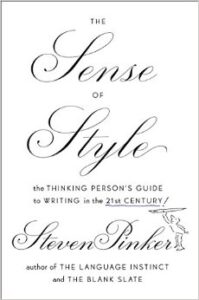 Steven Pinker is well known as a writer on the relationship between linguistics, psychology and evolution, with books such as The Language Instinct and The Stuff of Thought being both academically rigorous and surprisingly popular.

His latest book is The Sense of Style: The Thinking Person's Guide to Writing in the 21st Century, and with this he moves away from the more abstract notions he elaborated in his earlier works and closer to a ‘style guide’ in the mode of Strunk and White and Fowler.

Which is not to say that he abandons his professional practice altogether—far from it. Because although he concentrates on the proper structure of paragraphs and sentences and words needed to produce clear writing, he explains why these structures work in the way they do. It’s not simply a case of ‘Write this way because I say so’; it’s more, ‘Writing this way will produce the effect you’d like your reader to experience, because this is the way language works.’

Here’s an example of where he brings a certain amount of sciency stuff to bear on something we might perceive subliminally but couldn’t really explain:

The best words not only pinpoint an idea better than any alternative but echo it in their sound and articulation, a phenomenon called phonesthetics, the feeling of sound. It’s no coincidence that haunting means “haunting” and tart means “tart,” rather than the other way around; just listen to your voice and sense your muscles as you articulate them. Voluptuous has a voluptuous give-and-take between the lips and the tongue, and titillating also gives the tongue a workout while titillating the ear with a coincidental but unignorable overlap with a naughty word. These associations make a sea of voluptuous models and titillating cover lines more lively than a sea of sexy models and provocative cover lines.

The book begins with explorations of what makes good—and bad—writing, and a discussion of what he calls the ‘classic style’. Although they may not know it by this name, most writers of fiction will be familiar with it:

The Guiding Metaphor of Classic Style

The guiding metaphor of classic style is seeing the world. The writer can see something that the reader has not yet noticed, and he orients the reader’s gaze so that she can see it for herself.

This is very close to the injunction that all writers of fiction recognise: ‘Show, don’t tell’, but Pinker explains at chapter-length both why this style is helpful to readers, and where it stands in relation to other styles such as ‘practical’ or ‘contemplative’ or ‘romantic’. It’s worth the price of admission for this explanation alone.

Pinker’s other main theme is the usefulness of some kind of ‘tree’ notation to understand how sentences work: appreciating the engineering design behind a sentence—a linear ordering of phrases which conveys a gnarly network of ideas—is the key to understanding what you are trying to accomplish when you compose a sentence.

This chapter becomes complex as Pinker becomes more precise in his definitions, but sticking with it does reveal insights about word placement and sentence structure. And as he says,

The reason that the task is so challenging is that the main resource that English syntax makes available to writers—left-to-right ordering on a page—has to do two things at once. It’s the code that the language uses to convey who did what to whom. But it also determines the sequence of early-to-late processing in the reader’s mind. The human mind can do only a few things at a time, and the order in which information comes in affects how that information is handled.

For Pinker, this is one of the key lessons that writers must learn when they begin to create their fictional world—readers cannot see what the writer is seeing, so the writer must present the evidence for that world in a way that makes sense and in a sequence that is logical. Pinker suggests that writers suffer ‘the curse of knowledge’ – they know what they’re writing about, and what they’re ‘seeing’, and sometimes forget to give readers sufficient information to reconstruct the world for themselves. Word order, sentence construction and paragraph sequence all contribute to making that process easier for readers, so it’s essential to know how syntax works, even if it’s a knowledge that you keep on a back-burner while you write.

While this book is at some level a ‘technical’ work, it’s a hoot to read. Pinker draws examples of good and bad writing from a wide range of sources – academic texts, internet memes, classical fiction, student essays. If you’re at all interested in writing as a craft as well as an art—and if you’re not, why not?—this book will both enlighten and entertain you, and leave you with a broad smile on your face.

Keith Dixon has had a varied career as a proofreader, copywriter, teacher of English and American literature, and organizational psychologist. He’s currently writing a series of crime novels set in the UK and featuring a hard-bitten private investigator, Sam Dyke. He lives in anticipation of what’s going to happen next.