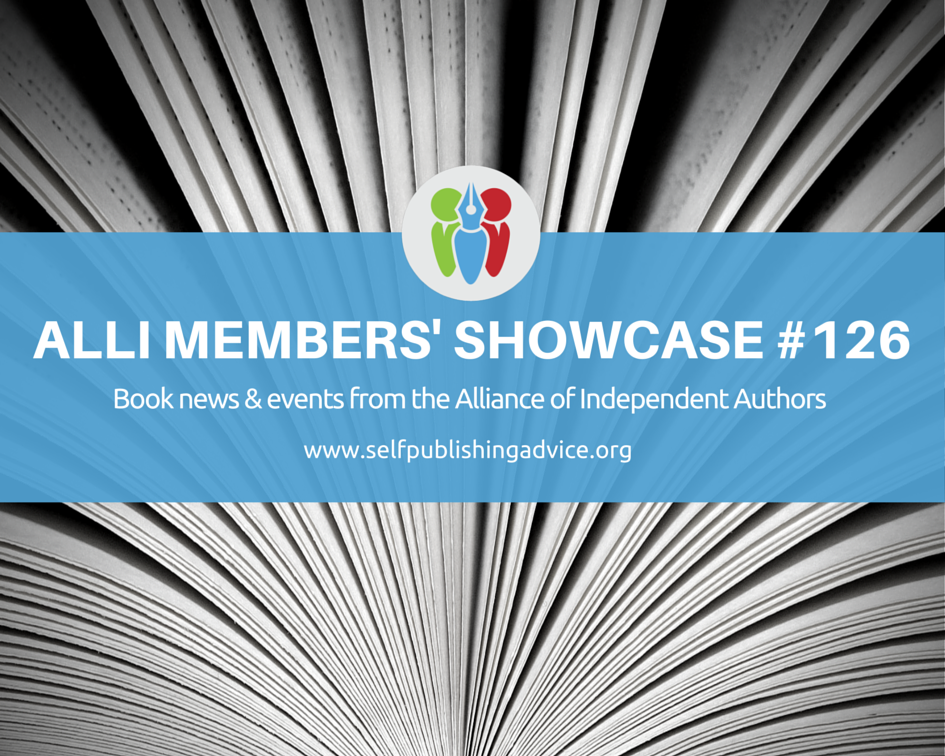 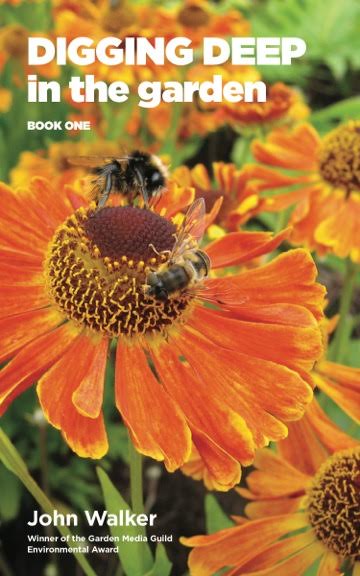 Digging Deep in the Garden: Book one

All gardeners interested in gardening's place in the wider natural world; paperback, ebook.

A celebrity gardener’s ‘wobble’ over climate chaos… the effect genetically modified crops might have on our gardens and allotments… how adopting a vegan-organic approach can make growing more compassionate… why pesticides must be consigned to the history books.

In this diverse, lively and thought-provoking collection of essays about gardening and its relationship with nature, John Walker digs deep into gardening’s subsoil to challenge assumptions, raise awareness and encourage us to ponder how what we do on our plots affects our shared living world.

This is an important read for everyone from the seasoned horticulturist to those who just happen to have a garden. John Walker looks at the innate link between gardening and the natural world – and the wedge often forcibly driven between them. He asks how, for better or worse, our gardening activities impact the environment and explores ideas not found in mainstream gardening journalism. Digging Deep is witty, thought provoking and, at times, uncomfortable reading that raises important questions about the power of big business and celebrity. Looking forward to Book 2. Amazon.co.uk review, July 2015. 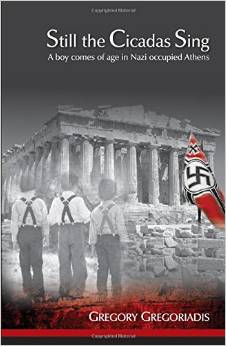 Still the Cicadas Sing (published early this year through Matador) has been reviewed favourably by a number of readers.

Written by Gregory Gregoriadis, a Greek native who lived through the events described in the book, Still the Cicadas Sing: A Boy Comes of Age in Nazi Occupied Athens depicts the crucial role Greece played during WWII in defeating Mussolini's Italy and Hitler's Germany.

Moreover, the novel was shortlisted for the 2015 International Rubery Book Award (Fiction category). 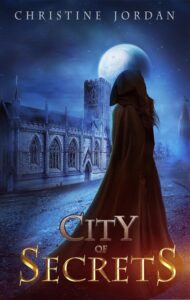 When in 1497 murder, flood and disease hit the holy city of Gloucester it’s not long before the monks of Blackfriars and the corrupt burghers of the city start to talk of sorcery.

Orphaned Emmelina, trapped in marriage to the boorish Humphrey, finds herself the focus of fear and superstition. Punishments are brutal; fires will be lit; people will burn.

But what really happened to her friend and maidservant, Fayette, and how much is she prepared to risk in the name of freedom… and of love? 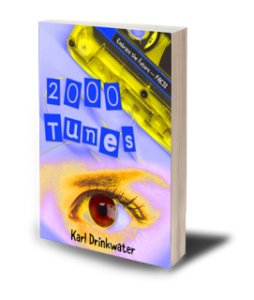 Just one step. A foot moves and you’ve made a decision, gone partway down a road. Momentum keeps you going. A

step to the right. It would be so easy. One moment, balanced on a point.

Mark Hopton’s an outsider obsessed with Manchester music. He knows the dates, facts, band members, lyrics, histories and places. He can join them in complicated webs of association because he knows the secret: everything’s connected. Music’s his escape into a better world. 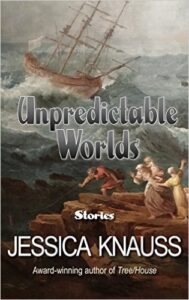 Unpredictable Worlds, a five-star-rated fresh release, normally $3.99 on Kindle, now FREE this weekend! Saturday, July 18 through Monday, July 20, this collection with award-winning stories can be yours at no charge.

A teacher controls her students with an edible microchip. A reporter turns into a rhinoceros. A couple's efforts to eat local go frighteningly awry. If you're looking to be surprised, puzzled, or just plain entertained, pick up this omnibus. There's something for everyone!

More than twenty years in the making, Unpredictable Worlds contains all of Jessica Knauss’s published and prize-winning short fiction as of March 2015 and a few of her best stories never before seen in print or ebook.

Reviewers have called Unpredictable Worlds “funny, touching, thought-provoking, anger-inducing, and faith-affirming.” You won't regret spending $0 on this unique journey through worlds and words. 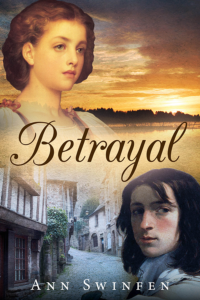 In 1648, the coldest year in living memory, Mercy Bennington and her neighbours struggle to rebuild their lives after the disastrous man-made flood, but the mysterious speculators are still bent on seizing their lands. The local magnate promises to help, but does nothing.

Mercy’s brother Tom, crippled in the earlier attacks on the Fens, returns to Gray’s Inn in London, but his legal studies are not his only goal.

Somewhere in London there must exist a copy of the ancient charter granting ownership of the common land to the fenlanders, provided that Tom can find it before his enemies have the chance to kill him.

There will also be a Countdown Sale of Flood in Kindle format, the first book in the series, running from Friday 17th morning to midnight Tuesday 21st. 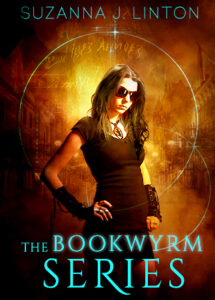 This is a belated release party for my urban fantasy short fiction series, called The Bookwyrm Series. There are slots open for reviewers and bloggers. The author will also be there at the beginning and end to answer questions and discuss the series.

The Bookwyrm Series is about Helen Delacroix, an aura reader and owner of The Bookwyrm Bookstore. A death threat left in her mail drags her into the shadowy world of bounty hunters, hate groups, and the supernatural community at large. 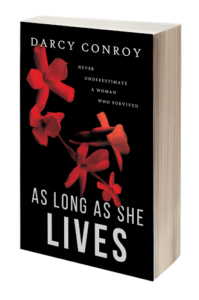 Launch of As Long As She Lives in Melbourne

The launch for As Long as She Lives happened on Friday July 17th, 6:30pm at Dymocks Bookstore Melbourne, 234 Collins Street Melbourne, Victoria Australia

After 4 years teaching in central Africa, Caitlyn Lancaster returns to her family in Australia, telling them she’s been sent home because of looming political unrest. But Cait is more fragile than she and her Federal police handler anticipated. She’s forced to accept that childhood family friend, now police detective, Riley Duncan must be told the brutal truth if she is to keep herself and her family safe. 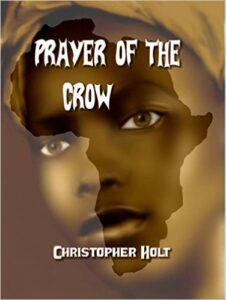 It might interest you to know that my third novel, Prayer of the Crow, was on the shortlist for the 2015 Rubery Book Award. 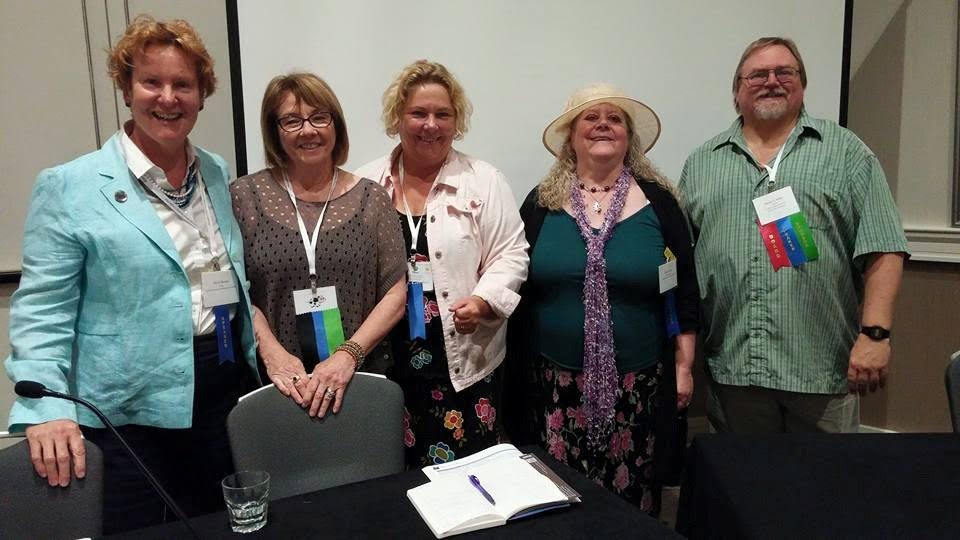 ALLi author members, Anna Belfrage, Helen Hollick, and Alison Morton, plus Geri Clouston of IndieBRAG and Dan Willis of Bygone Books took part in The Brass Tacks of Self-Publishing panel at the 2015 Historical Novel Society conference in Denver at the end of June.

Given the rapt attention of the audience, their questions and the thirst for information that continued all weekend, it was an outstanding success! Our main points were quality – editing, cover design, proofing and formatting. No author can afford to put out a sloppy book in today’s competitive marketplace and expect recognition or even sales.

Information and advice giving and author education are the duty and pleasure of experienced indie publishers and we were all keen to help the next wave of writers. It was a genuine pleasure to do this in Denver. I’ve given much more detail on my blog.

If you are a member of The Alliance of Independent Authors and you would like to showcase your work on our ALLi Showcase, please send it to [email protected]allianceindependentauthors.org to reach me no later than the Thursday proceeding the Saturday you would like it published.