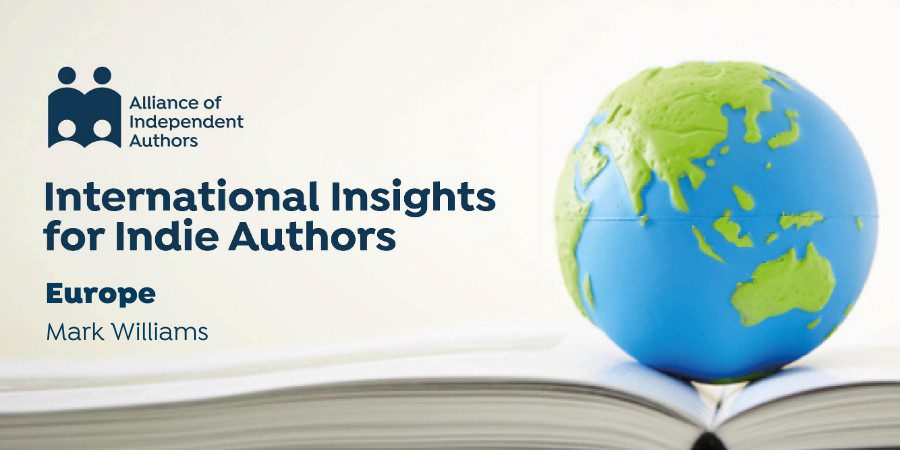 For the next edition of the Alliance of Independent Authors International Insights hosted by Mark Williams of The New Publishing Standard, we’re back for another regional spotlight. To read the rest, you can visit: Asia here, Middle East Arab markets here, Ibero-America here and Asia-Pacific here. Today, Mark is focusing on the Europe market.

We’re on the home stretch with our introductory overview of the global book markets, with just two to go, and our penultimate essay takes us to Europe, where we may well be thinking we’re already fully engaged, what’s to know?

Kindle UK. Kindle Italy. Kindle France. Kindle Spain. Kindle Germany. Amazon’s got Europe covered for us! And it’s a fair point. These are among the biggest book markets in the world, and the icing on the cake is that Apple, Kobo and Google Play are all in these markets too. Let’s put our feet up and enjoy the ride!

But while there’s no question these markets will bring the bulk of our European earnings we’ll be missing out on a lot more by not looking at the bigger picture, and also drilling down further into the Big 5.

Let’s start with the UK, where the ebook scene is dominated by Amazon, of course, but Apple and Google Play can both deliver respectable results (if we bother to promote our link and not spend all our promo time on Amazon). Audible is the dominant audiobook outlet for the UK, but as well as Apple and Google Play there is also Bookbeat, which offers a dedicated ebook and audiobook subscription service. Scribd, 24Symbols and Bookmate are also subscription options available in the UK.

OverDrive supplies many UK libraries, and then of course there’s Kobo, which for the UK market has a twin opportunity, with the localized Kobo UK store and also access to the UK’s second largest bookstore chain, WH Smith. In fact, Kobo is full of surprises in these particular west European markets. For example Kobo is the driving force behind the digital books section of the Netherlands’ biggest online store and biggest ebook store, Bol.com.

Bol carries over 3 million ebooks and 1.8 million of them are in English. But don’t be so surprised. The Netherlands regularly tops the English Proficiency Index.

Subscriptions services ooze out of every pore in the Netherlands, with Storytel NL, Bookbeat NL, Nextory NL, Scribd, 24Symbols… And not to mention Kobo Plus, the subscription arm of Bol.com. The Netherlands is also the home of the globally expanding curated-content subscription service Bookchoice.

When we think France and ebooks we of course think of Amazon France, and then there’s Apple and Google Play bringing up the rear. Or so we might think. But what do French booklovers look to when thoughts turn to digital reading?

Kobo, maybe? In fact Kobo is again multi-faceted, and is behind the Fnac France ebook store and Rakuten France ebooks.

While this essay is ebook focussed (I’ll come back on print for indies another time) it would be remiss of me not to point out that, in contrast to Kobo in the Anglophone markets, Kobo Writing Life France offers French indie authors the chance to be part of Hachette Live print distribution through Bookélis.

But French readers might also be heading to Numilog or Youboox or Youscribe to name just a few domestic alternatives, and they also have the choice of Scribd, 24Symbols, etc. In fact, when we step outside out Anglophone Amazon-centric world we will often, counter-intuitively, have to get used to Amazon being second or third choice of readers, or maybe not an option at all.

In France the ebook market is valued at $404 million, and while we can’t put a value on Amazon’s share, it does not dominate France in the way it does the US and UK.

In Spain (ebook market value $233 million) Amazon is a major force, to be sure, but again it’s not the only show in town. Apple, Google Play and Kobo are of course options (Fnac Spain and La Central both Kobo supplied), and Spain is the home of subscription service 24Symbols, but there are plenty of other outlets Spanish booklovers can choose from. Storytel, for example, is in Spain (unlike Audible). And small stores like Casa del Libro sell ebooks.

Portugal, since we’re on the Iberian peninsula? No Amazon here, but Apple and Google Play are and Kobo serves Fnac Portugal.

In Italy Amazon again is a big player but not the giant it is in the UK. I won’t even attempt to list here all the ebook outlets in Italy. Just to say that alongside Apple and Google Play Amazon competes with Kobo as the digital arm of two of Italy’s largest publishers and retailers, Mondadori and La Feltenelli. The Italian ebook market is valued at $200 million.

After all that you would think Kobo would be a star player in Germany, as Europe’s biggest book market and second largest ebook market (the latter valued at $369 million in 2020), and it is, but not in the way you’d expect.

Kobo hasn’t got an ebook presence to speak of in Germany but powers the Tolino Alliance stores, which are the main rival to the Kindle store in the country. In fact, the Tolino stores cover five European countries: Germany, Austria, Netherlands, Italy and Switzerland with stores that currently include Thalia, Weltbild, Hugendubel, Osiander, Bucher.de and Meine Buchhandlung. Tolino used to include Belgium’s Standard Boekhandel but that now has a new supply chain.

Ciando is another significant player in the German digital books arena, with its own store and also feeding libraries and other stores. Most significantly Ciando has a dedicated website just for English-language ebooks. (Germany ranks tenth in the world in the English-language Proficiency Index.

Okay, so that’s the Big 5 digital book markets in Europe. What about the rest?

What follows will be a lightning tour of at least some of the rest of Europe, and that of course because ebooks and digital audio hasn’t reached the rest of Europe yet, right? Don’t you believe it. The lightning tour is simply because I’m fast running out of space, but rest assured we’ll return to these markets in more detail another time. But for now:

Turkey, with 69 million people online, has more internet users than the UK, but as yet digital books are still small. The Turkish ebook market this year is valued at just $61 million, and small stores like D&R, Artcivic, Nineva and Idefix are where the action is. D&R and Idefix are both Kobo-supplied.

Storytel is in Turkey and so is Audioteka. Apple does not list Turkey in its Apple Books markets, but Google Play is there.

Apple and Google Play are often a guessing game for European markets. For example, Apple Books supports Cyprus and Slovenia. Google Play Books does not. But Google Play supports Russia and Belarus which Apple does not. And some countries are not on either list. Albania, North Macedonia, etc.

But let’s get back to the positives and take a second look at the aforementioned Storytel and Audioteka, both audiobook-first but also ebook-engaged.

Based in Sweden, audiobook and ebook subscription service Storytel should be no stranger by now. Its European reach is this: Sweden, Finland, Norway, Denmark, Iceland, Turkey, Bulgaria, Germany, Italy, Netherlands, Poland, Russia, and Spain. Click here to go to the Storytel landing page for all 20 markets.

Audioteka, has just launched in Turkey but is based in Poland, where it is the giant of digital books (also in the Czech Republic) and has over 1 million subscribers. Audioteka streams audiobooks in Polish, Czech, Slovak, Lithuanian, French, German, Italian, Spanish, Turkish and English and has localised satellite stores in Italy, France, Spain, Germany, Sweden, Lithuania, Slovakia, Czech Republic and Turkey.

Heading back to Sweden and say hello again to Bookbeat, the digital books arm of publishing giant Bonnier, that is also in Denmark, Finland, Germany and the UK, and with notional reach across 28 European countries, while rival Nextory is expanding fast and now in six markets: Sweden, Finland, Denmark, Austria, Switzerland and Germany.

Denmark is home to Mofibo, now owned by Storytel and also Podimo, which is a podcasting outfit worth keeping a close eye on. As well as Storytel, Bulgaria is a home for Bookmate, which partners with telcos in Bulgaria and Serbia. Romania’s biggest ebook store, Elefant, is legendary, while Hungary also has its own share of digital books outlets. E-letöltés, DiBook and Ekonyv, for example. And the Czech Republic is no stranger to digital books, and even has its own streaming service, Bookport.

And we’ll wind this post up with more on Poland, because we’ve not yet exhausted this exciting market.

With 29.7 million people online Poland is a vibrant digital books market despite no Amazon (Polish is not supported by KDP), and in addition to Audioteka and Storytel Poland it would be remiss of me not to mention smaller Polish opportunities like Empik or Ebook Point, UpolujeBooka or Publio, Virtualo or Woblink. And let’s not forget the fast-growing digital books subscription service Legimi.

Across Europe there are 727.5 million people online that could be engaging with our digital books, quite apart from the opportunities in print.