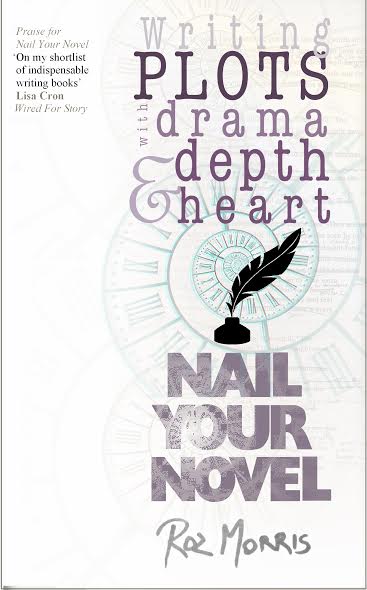 Every Saturday ALLi will tell the world about our members' latest book launches, news, awards, freebies, workshops, events and updates on the writing life and take a look at the projects and businesses of our partner members. 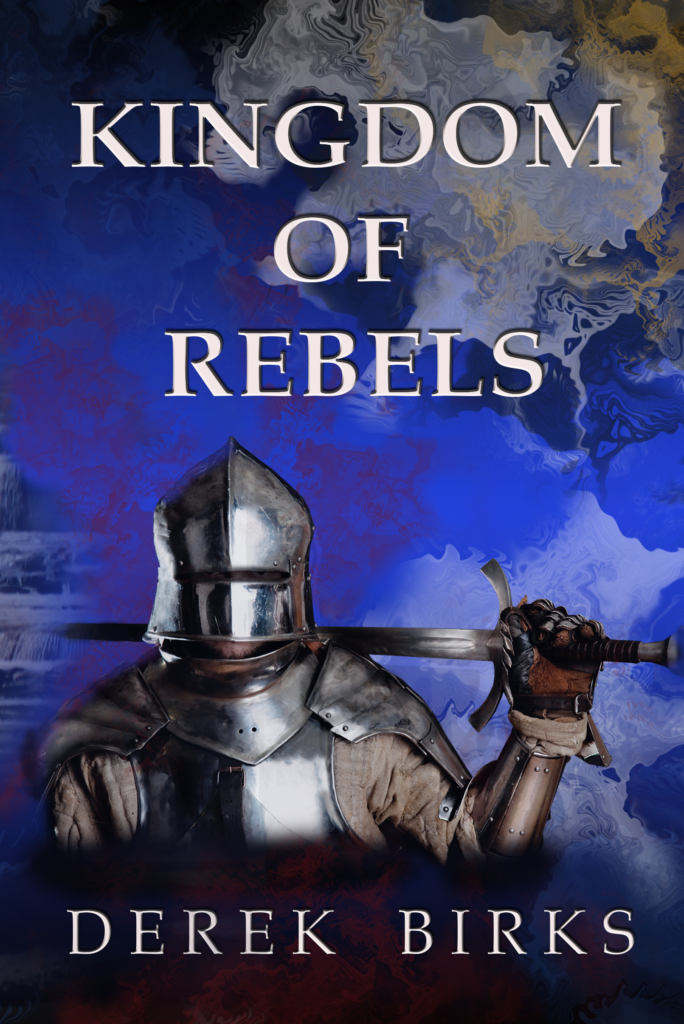 When all hope is gone, only death lies in wait…

England in 1468 is a nervous kingdom. King Edward IV has fallen out with his chief ally, the powerful Earl of Warwick. Ned Elder, a young lord whose sword helped to put Edward on the throne, has been forced out of England by Warwick. Far away on the Scottish border, a beleaguered fort, Crag Tower, desperately awaits Ned’s return.

Led by his fiery sister, Eleanor, the dwindling garrison is all that remains of his brave army of retainers. Unknown to all except the loyal Ragwulf, Eleanor has Ned’s young son in her charge – a son who has never seen his father. But, as border clansmen batter the gates with fire, the castle seems certain to fall.

One by one Ned’s family and friends are caught up in Warwick’s web of treason. The fate of the Elders and those who serve them lies once more in the balance as all are drawn back to Yorkshire where they face old enemies once more.

Eleanor must hope that Ned will soon return. She must fight to keep that hope alive and when Lady Eleanor fights, she takes no prisoners…

Kingdom of Rebels is the third book of the Rebels and Brothers series, set during the Wars of the Roses. To find out more about the series have a look at my website. 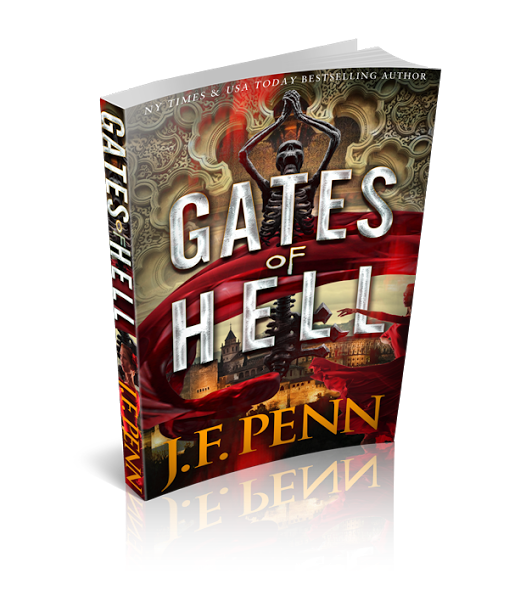 An ancient manuscript that leads to the Gates of Hell. A woman’s revenge for the death of her father. From New York Times and USA Today Bestselling Author J.F.Penn.

When the last of the Remnant is murdered at the Sagrada Familia in Barcelona, Arkane agent Dr Morgan Sierra is drawn into the hunt for a supernatural Key. She's joined by agent Jake Timber, who must face his own fears as they decipher clues left behind by Kabbalist scholars.

From ancient sites in Spain, to Israel and the Czech Republic, Morgan and Jake must follow the trail to the Key, while evading Adam Kadmon, a man consumed with a lust for dark power.

As the planets align, Morgan and Jake race against time to find the Key and destroy it before the Devourers and the Polluted of God emerge from the Gates of Hell to ravage the earth.

This is Book 6 of the Arkane supernatural thriller series, but it can also be enjoyed as a stand-alone novel.

Available on all ebook stores. 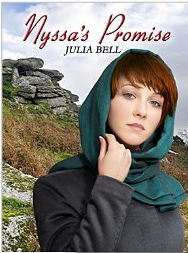 Since childhood Nyssa Wheeler has lived with her stepsister Gwen in a small house in Fulham, London. But Nyssa possesses the ability of a psychic empath and can read people’s emotions through touch. This ‘gift’ has enabled her to pursue the work of a private investigator.

In the year 1904, she decides to take the position of companion to the Dowager Lady Kirby, living at Kirby House near Bodmin in Cornwall. Here she meets the dowager’s two sons, Sir Howel, the sixth baronet and Captain Daveth Kirby, newly home from fighting the Boers in South Africa.

Although seeking a quieter life, Nyssa is drawn into the mystery of the disappearance of Lady Marie Kirby, Sir Howel’s new wife. Her investigation involves her in the legend of the Beast of Bodmin Moor, a creature that supposedly prowls the moor.

As the deaths mount up, Nyssa and Daveth must find the murderer before Nyssa, herself, becomes the next victim. 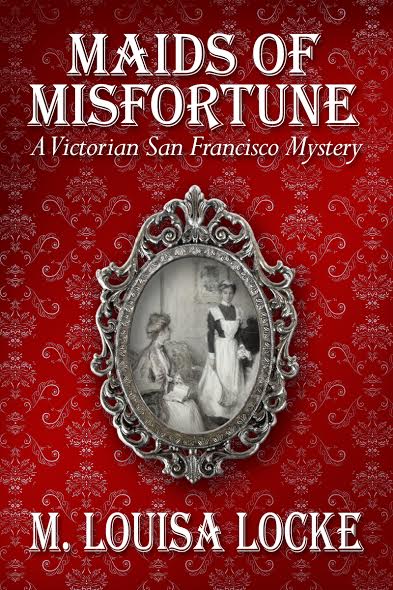 The first book Maids of Misfortune in my Victorian San Francisco Mystery series is now free in all major ebook stores.

It’s the summer of 1879, and Annie Fuller, a young San Francisco widow, is in trouble. Annie’s husband squandered her fortune before committing suicide five years earlier, and one of his creditors is now threatening to take the boarding house she owns to pay off a debt.

Annie Fuller also has a secret. She supplements her income by giving domestic and business advice as Madam Sibyl, one of San Francisco’s most exclusive clairvoyants, and one of Madam Sibyl’s clients, Matthew Voss, has died. The police believe it is suicide brought upon by bankruptcy, but Annie believes Voss has been murdered and that his assets have been stolen.

Nate Dawson has a problem. As the Voss family lawyer, he would love to believe that Matthew Voss didn't leave his grieving family destitute. But that would mean working with Annie Fuller, a woman who alternatively attracts and infuriates him as she shatters every notion he ever had of proper ladylike behavior.

Sparks fly as Anne and Nate pursue the truth about the murder of Matthew Voss in this light-hearted historical mystery set in the foggy gas-lit world of Victorian San Francisco. 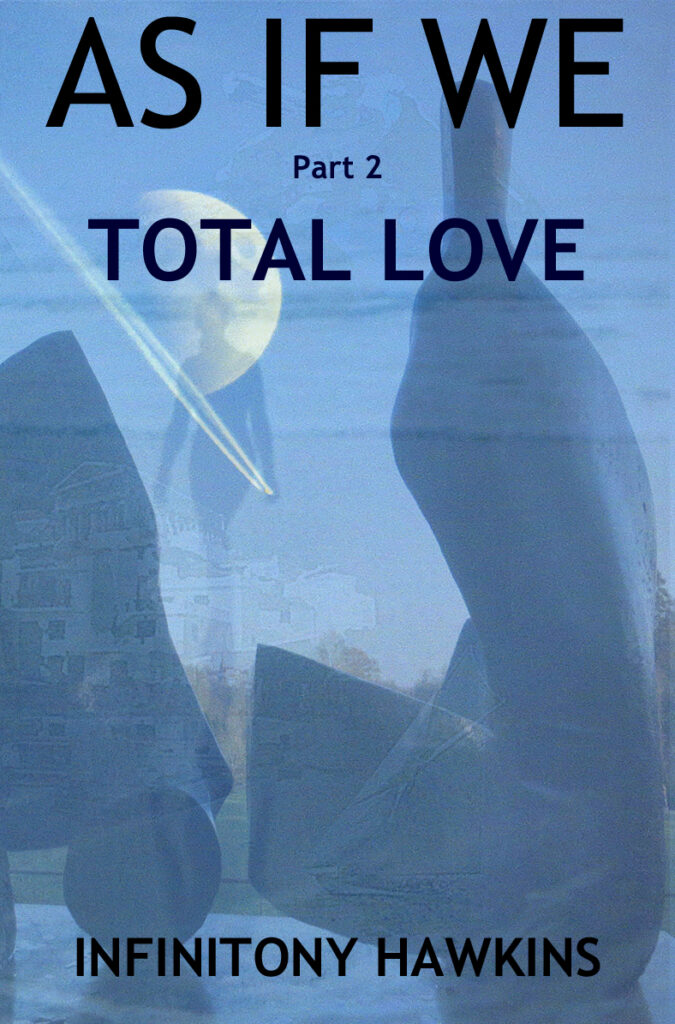 I'm offering Part 2 first because it contains the punches and I think it stands alone as a book. Part 1 will be like the pre-trilogy of Star Wars. And, of course, it will add hugely to Part 2 once people have got into the way of reading it.

It is as if we are the infinite source of ourselves. To say we are asleep or dead to this is the understatement of all time. Hence the strange influence of the unborn to whom we are the seed.

This fictional tale is a crucible in which higher creative energies have played. I started it in 1966 and within six weeks hit a wall with the disaster at Aberfan, where a coal-tip avalanched destroying a school and 116 children.

The price is 0.99 cents/ 75 pence and there is a sample page in which are 15 000 words, yours to enjoy absolutely free or to whet your appetite.

I should emphasise it is fiction, it is just a story, but so is much else in our heads which controls our lives. And I don't think it has the answer, it's just preparing the ground.

Roz Morris has finally managed to release the third book in her Nail Your Novel series: Writing Plots with Drama, Depth & Heart. She says it turned into a bit of an epic, because once she started examining the way stories work she found as many exceptions as rules.

Anyway, it's packed with tutorials, practical examples and plot-building games, so if you want to supercharge your storytelling in 2015, or find a plot for your fab characters, this is the book. 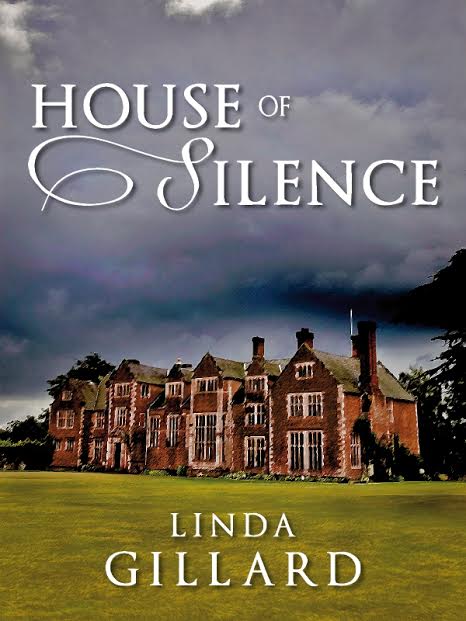 Ulverscroft, the Large Print publisher will be re-publishing House of Silence, her Kindle bestseller in February.

House of Silence, a mixed-genre novel was rejected by Linda's traditional publisher as difficult to market, so Linda published it herself and marketed it as “Rebecca meets Cold Comfort Farm.” 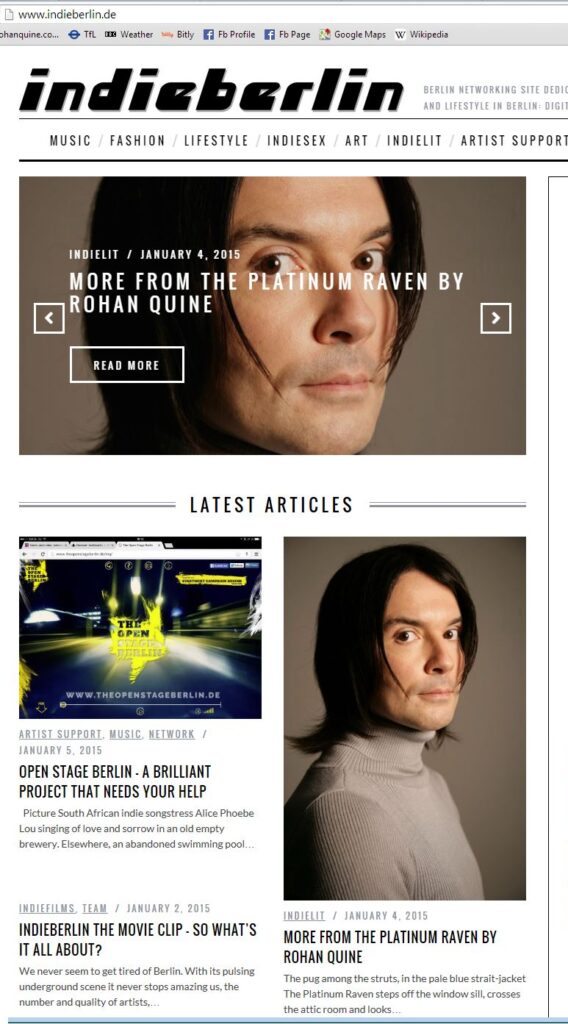 “indieberlin” has kindly published another slice of my novella The Platinum Raven. This time it’s a wholesome little snippet from chapter 12, “The pug among the struts, in the pale blue strait-jacket”:

In last week’s excerpt we met Scorpio. This week we meet two others in that nightclub tower of shadow, up there in the mountains of Dubai:

Amber, who is the continuation of Rutger Hauer’s lethal character in the movie “The Hitcher” after those cameras had stopped capturing all that alluring evil in the desert; and

The Platinum Raven herself, the kind of Icon of Platinum Perfection whose back-story is never known. (“As for me, I thought perhaps I’d stay behind the billows with my breasts pointing upward and my groin pushed out, with my right hand skyward and my left hand on my hip, eyes wide in the silver staring softly through the mirror mist unblinking (if that’s fine with you?). —There again: the thunder on the left. Did you hear it?…”)

For more of all three characters, as well as the Chocolate Raven plus the original Raven who started the whole malarkey, there are many more snippets from the novella, both as text and as video, at:

And you can pick it up in paperback or as an ebook, from most retailers, via the links. 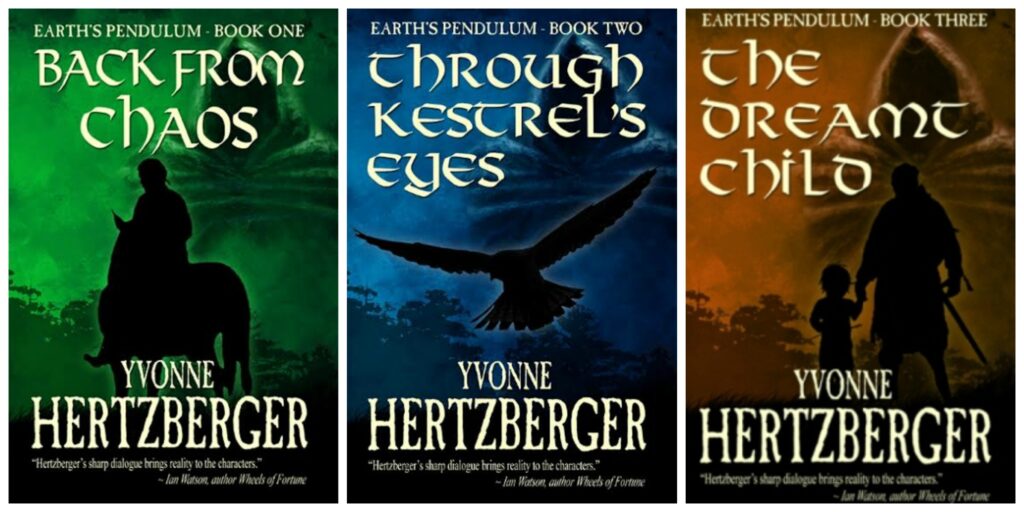 Back from Chaos: Book One of Earth’s Pendulum

Battle and bloodshed have upset the Balance, crippling the goddess Earth’s power to prevent further chaos. Unless it is restored more disasters will ensue: famines, plagues, more unrest and war. Four chosen: Lord Gaelen of Bargia, Klast, his loyal spy and assassin, Lady Marja of Catania and her maid Brensa. Each is unaware of the roles they must play in restoring that Balance.

This sequel to Back from Chaos begins seventeen years later. The peace that followed the end of the Red Plague is shattered when the lords of Gharn and Leith are toppled by traitors, throwing the land into chaos.

Liannis, the goddess Earth’s seer, her apprenticeship interrupted by the death of her mentor, must help restore the Balance. Until it is, Earth’s power is weakened, preventing her from sustaining the conditions for good harvests. Drought and famine result.

Time is short. The people with starve if Earth cannot heal and the Balance cannot be restored.

In this conclusion of the Earth’s Pendulum trilogy, Liannis, the goddess Earth’s seer, can no longer deny the meaning of her recurring dream. She must join with Merrist, her devoted hired man, and bear a child – one with great gifts.

They must succeed if they are to initiate the new era of peace and balance so desperately needed.

All books available on Amazon.com 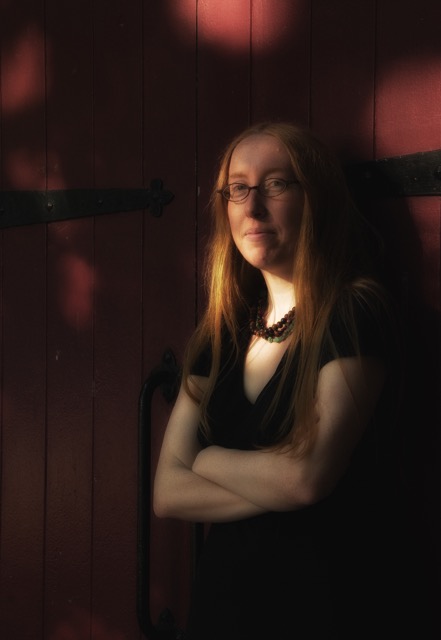 How to Write a Convincing Medieval Setting

This is a four-week workshop offered through Savvy Authors on research methods for historical novelists and fantasy writers. We’ll focus on one particular setting—twelfth-century Western Europe—but many of the things we’ll discuss and the skills you’ll learn can be applied to researching other times and places.

We’ll look at both documentary sources that you might use to answer factual questions about the period, and literary sources that give you insights into how people felt about the times in which they lived. There will be lectures, suggested readings, and scavenger hunts!

Alice Degan  is an academic and novelist with a PhD in Medieval Studies. Her dissertation on privacy in stories of illicit love was titled Get a Room, and she has taught courses on Arthurian literature and medieval women’s writing.

Ignoring the obvious application of “write what you know,” she set her debut novel, From All False Doctrine, in 1920s Toronto. She loves learning what made the people of the past tick, both for fiction and scholarship.

The workshop costs $40 ($30 for members of Savvy Authors) and starts January 26. Find out more at Savvy Authors.