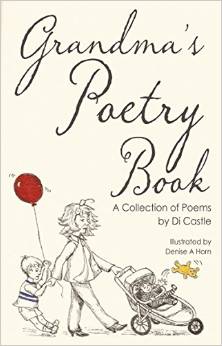 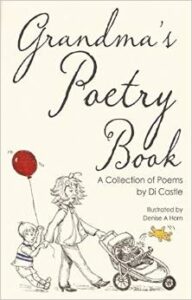 Denise (illustrator) and I is when we celebrated receiving our copies.

The inspiration for the Grandma’s Poetry Book was the birth of my first grandchild. I had always love A A Milne, Spike Milligan and Pam Ayres and my illustrator, Denise, is inspired by E M Sheppard.

Grandma’s Poetry Book is a nostalgic childhood journey as seen through the eyes of a first-time grandmother. Fifty-seven poems bounce the reader through the writer’s experiences with hilarious illustrations by Swanage artist, Denise Horn.

Funny and touching in turn these poems resonate with a grandmother’s love for her grandchildren. 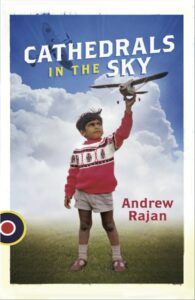 Cathedrals in the Sky is the turbulent saga of Ash, a troublesome, twelve-year-old, trans-racially adopted British-Asian boy, sent to live on a Kent farm by a mother too ill to cope, during the long, hot summer of 1976.

There, he discovers a buried WWII Spitfire engine and determines to rebuild it with his Grandfather. But where’s the rest of the aeroplane?

1941: Trinidadian fighter pilot Rudy finds himself reflecting on life, somewhere over the coast of France, limping back to Blighty in a wounded Spit.

2014: St. Mary’s Hospital, Paddington. As Ash surveyed his own son Tom's broken body, he wondered how much he was willing to share, now Tom was old enough to ask awkward questions…

Spanning over 70 years, Cathedrals in the Sky is a tightly woven coming-of-age psychology of love, loss, parenthood and identity, told from a series of five very different perspectives.

My first book, London Calling, is up for Best Cover in the annual Rainbow Awards.

It would be brilliant if members would take the time to vote for it.

Simply click on this link , select a minimum of three covers to vote for and submit. Closing date in November 29th.

My new Complete Puppy Book will make a great gift for new and experienced puppy owners.

The book is available as POD and all E-book formats (via amazon, Barnes & Nobel, iBookstore et al)

Nothing beats a cute puppy for love, but proper puppy care and training prepares you and your new dog for a healthy and long life together. Written by Puppies Expert Amy Shojai, this up to date new guide provides a “Puppies 101” packed with veterinary facts, health care advice, how-to tips, and fascinating information about:

Nearly half of United States homes keep over 83 million pet dogs and puppies. That’s a lot of furry love! Complete Puppy Care empowers you with all the information necessary for your puppy to grow up into the happy, healthy dog you both deserve. 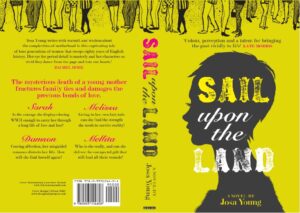 Sail upon the Land is Josa Young's second novel.

The first, One Apple Tasted, was traditionally published in 2009. It is currently available for pre-order via Kindle for release on 1 December 2014. The paperback will be published 16 December 2014.

Josa Young writes with warmth and wisdom about the complexities of motherhood in this captivating tale of four generations of women that sweeps eighty years of English history. Her eye for period detail is masterly and her characters so vivid they dance from the page and into our hearts.Rachel Hore, Sunday Times bestselling author and former fiction editor.

Sail Upon the Land is the story of two fractured families colliding in the dynamic social landscape of the last eighty years. Everything changed for women and families rose and fell. Great houses were built and left to rot when all the sons were lost at war. Its characters are grocers, servants, doctors, debutantes and shop-girls, Lords and Ladies, Hons and rebels.

The story travels from the hills of India to the ballrooms of London via England's Home Counties. It’s a novel for people who like to get their teeth into a large cast of characters over a long period of time. It’s a bit Upstairs Downstairs, and a bit Downton Abbey, but it's a whole lot more modern as well. 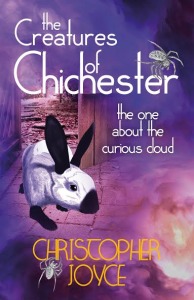 As a royal prince takes his first breath, strange things happen to the Twolegs of Chichester. It's something to do with the swirling purple cloud that has suddenly appeared above the cathedral.

A little deaf girl and her pet rabbit, Plectrum, have no idea about the danger they are in – or how their lives will change forever. Once again, Button and Stitchley, the intrepid spiders from North Street call on the creatures of Chichester to solve the mystery as they battle with the starving foxes howling in the night.

Christopher Joyce has released the third book in The Creatures of Chichester series.

The heroine of this book is a little deaf girl called Izzy and her pet rabbit, Plectrum. ‘I got a little bored reading kids’ books where the hero was always a little white boy, so wanted to break the mould' he said.

There is also a strong environmental message in this book.

Available on Amazon in dead-tree format and as an e-book. Audio version coming soon.

Inspired by Chaucer’s Canterbury Tales, Santiago Tales tells the story of Beth, a woman whose life is falling apart – her marriage is over and her health is failing.

She decides to get away from it all and embarks on a pilgrimage to Santiago de Compostela in northern Spain.

She walks 500 miles along the Camino de Santiago and the other pilgrims she meets on her journey change her life. 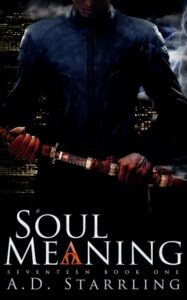 AD Starrling is pleased to announce that Soul Meaning, the first novel in her award-winning thriller series Seventeen, is now free at Amazon US, Amazon UK, most other Amazon retailers, iTunes, Kobo, Nook, and Smashwords. Enjoy!