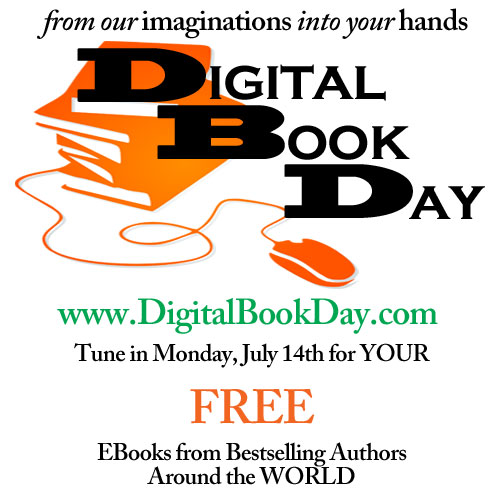 “Sparks fly when Evie Stone joins the battle to save Cupid's Way – this perfectly preserved Victorian terrace, surrounded by tower blocks and retail parks, is now under threat from developers. Dynamite Construction have the deal in the bag – CEO Michael Andrews, charismatic and super-successful, has never let sentimentality get in the way of business. At least, he hadn't until he met Evie Stone.”

Cupid's Way is available in paperback and ebook, from Amazon. 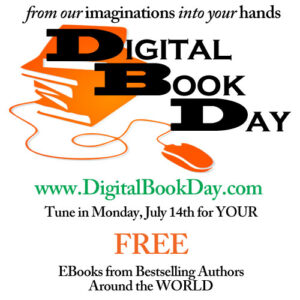 When I heard the news that World Book Night USA was over, it saddened me. And it came on the heels of so much upheaval and distress in the publishing industry that instead of addressing the issue with more rhetoric and empty words, I decided to take action.

After all, thanks to digital publishing, authors (traditionally published or self-published) have a less expensive and more efficient way to gift books to readers via e-books.

I myself have given away over 50,000 print and e-books in the past five years—and it’s always, always, always led to new readers finding me, not to mention a ton of fun for me to do, kind of like Christmas all year round! So I thought, why not a self-funded Digital Book Day?

One day, one site, hundreds of authors and free books, all to celebrate our readers!

I'm having a Kindle Countdown Sale of Watching Charlotte Brontë Die: and Other Surreal Stories from 4-10 July. The stories will be reduced to £1.99/$1.99 respectively.

“No bike wheels spinning high in the air, no ghastly corpse, or crumpled victim propped against a wall. The street was damp and devoid of life, but also of death. I watched the water running away. All I could think was one small thought. I hadn't known Charlotte could ride a bike.”

‘Mystery does arise in many different places in this collection of nine stories from somewhat intriguing realities. Be prepared for the unexpected.' Ingrid Stevens

Kathryn Guare's debut suspense/thriller, Deceptive Cadence was recently honored with a Finalist Medal for Best Action/Adventure Novel in the 2014 Next Generation Indie Book Awards, and has now been named as a semi-finalist for the 2014 Best Kindle Book Awards.

The book follows the adventures of Conor McBride, a talented Irish musician and reluctant undercover operative, who embarks on a journey from Ireland to India to search for the man who ruined his career: his own brother.

Deceptive Cadence will be available in Amazon's Kindle Store at the special price of $0.99/£0.75 from 12-15 July, in association with a Kindle Countdown Deal for Guare's second novel in the series, The Secret Chord.

Well, Jessica Bell's giving away her latest release, White Lady, for free to every single person who signs up to the Two Lies & a Truth Blog Tour (taking place October 1 – 31). It's hassle-free.

All you have to do is post what she sends you to your blog (or Facebook page) and Bob's your uncle. She will also be giving away a copy of the book to one lucky reader of your blog. More details and sign up form here. 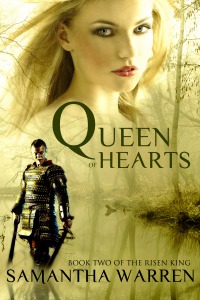 Queen of Hearts is Samantha Warren's newest novel. It is the second in the Risen King series, behind The Iron Locket, and her 25th book to be released to date.

Aiofe and Arthur have found themselves together in the land of Faery, surrounded by heartache and hope. They're prepared to take on the worst: A war is looming on the horizon, ready to pit the citizens of Faery against each other in a battle to end all battles.

Arthur was raised from the dead to stop that war, to protect the four realms from utter devastation, but when a long lost love arrives, he will be forced to question everything he thought he knew, and Aiofe will question him.

Late last week I received the news that Deadly Misfortune, Book Two in my Quintspinner series,  has won the Silver Medal for Book of the Year in the Adult Mystery Category.

I'm thrilled enough about that but also as a result, several bloggers have reported the winner's list in their blogs, including this one that is written in Japanese.

The intriguing thing about this is that when I click on my title as showcased on the Japanese blog, it takes me to Amazon's Japanese site for my book and the description and details are all there – in Japanese! (No translation needed by me.) The reviews though, are still in English 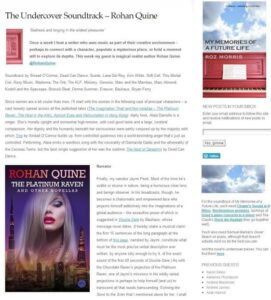 It was fun to be prompted into a journey through some of the music that helped create the cast of characters that’s loosely shared across The Imagination Thief, The Platinum Raven, Apricot Eyes and Hallucination in Hong Kong, through being on Roz Morris’s “Undercover Soundtrack”. 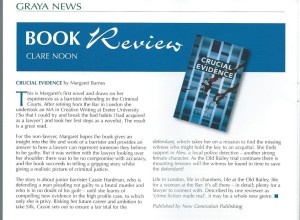 I have recently joined the Alliance having published my novel Crucial Evidence in January this year.

The price of the ebook, Crucial Evidence has just been reduced.

I have also attached a review from Graya Magazine which you may find interesting. The magazine is distributed to member of Grays Inn in London​

Workshopping with the World

Steven O'Connor, both a traditionally published and indie published author, is working hard on his next draft novel. It's called Beneath the Surface and it’s about a 14-year old unwell boy who enters a fantasy world under his garden.

Steven O'Connor is trying something different this time around. He's sharing his manuscript chapter by chapter on the internet as he redrafts it, hoping for your thoughts and reactions. (He wants to get this story right!)

If you're interested in checking out his progress and perhaps providing feedback (which he'd love), you can check out Beneath the Surface here at Wattpad or here at Widbook.

Tired of banging the Involution' drum, Philippa Rees has republished a book that she describes as a ‘Grand Central Station' of the sixties. It is A Shadow in Yucatan a poetic-prose story recounted on a beach, a story so poignant and heartrending it demanded the mythical treatment to reveal its universal dimensions.

There are rich characters, both sympathetic and otherwise. It also seemed to encapsulate the period of such promise, ultimately betrayed, so that story and time were reflective of each other. It is now available as an ebook as well as print where three five* reviews are already posted.

The Book will be free as part of the Digital Book Day giveaway on July 14th. A large sample can be read through Bookbuzzr from Philippa's website.

A large sample can be read on Bookbuzzr .

15 July ALLi London meet-up: getting together on your creative and marketing challenges

Calling all ALLi writers in or near London to come along to our next face-to-face meet-up on Tuesday 15 July. That’s only one week away – mark it in your diaries! There’ll be time for critiquing, networking and talking about any marketing or other challenges you may be facing. Both members and non-members are welcome. We start at 6.30 pm, upstairs at:

Bring along a five-minute piece of writing. It could be a chapter excerpt, character description, poem, plot outline or any other work-in-progress. You read it out and the group offers feedback and advice. Your literary gem can be rough or highly polished

– just have in mind a question you’d like feedback on.

When ALLi started at London Book Fair in 2012, we quickly found ourselves part of an organisation that was clearly going global. Just like our readers, indie authors are not limited to one territory, and ALLi is always striving to offer advice, collaboration and expertise across the world.

It’s a mission we are really focused on at the moment, as we work on our website upgrades and on adding new features that will be unveiled in September. And to kick things off, we are excited to be building an ALLi Street Team of local representatives in key territories across the world.

The Street Team will help us to coordinate our efforts and champion our aims of promoting excellence in self-publishing, as well as fostering the ALLi community at a local level. There’s plenty more on the advantages and the details right here. And if you’re interested in joining us, drop us a line.

Elsewhere, we also are pleased to see the arrival of Digital Book Day – a fantastic initiative from leading ALLi Member, CJ Lyons. Keep on reading, as we’ve got a bit of background and information below.

Your Members Questions Answered- with Orna Ross and Joanna Penn

Our next event is our regular ALLi Member Q&A with Orna Ross & Joanna Penn on July 27th. Any questions, let us know beforehand!

We'll be taking a bit of an August break after this month’s Q&A. But we'll be back with a bang in September, with an exciting new line up of events for your educational pleasure.

In the meantime, you can always catch-up on some of archive. If you’ve missed out on any of our Spring goings on, you can watch previous events via the ALLi YouTube Channel. And if you're on the hunt out for more, stay tuned to the Self Publishing Advice Blog, where we'll be unveiling our Autumn schedule soon.