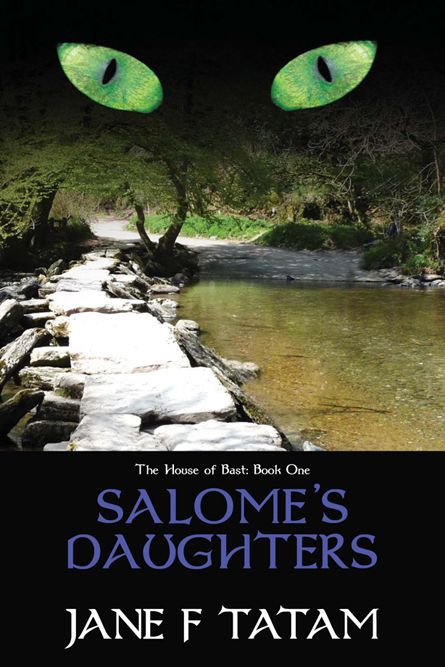 At London Book Fair (LBF), ALLi held an Indie Author Fringe Fest as part of a joint party with Amazon ACX, who were celebrating the launch of their audio book platform in the UK. ALLi organised an Open Mic event, compered by Joanna Penn, where ten members read or performed, and a Members’ Showcase table that displayed some beautiful books.

Here is a video of Orna reading two of her poems, “Halo” & “Long Light” and you can see all the readings, together with advisory seminars and panels from LBF, on our YouTube page.

In the disused library tunnels deep under Oxford, two women who have never met are about to commit murder together.

No Exit is a new dark thriller from Dan Holloway.

Jane F Tatam lives in Somerset and has been working in the publishing industry for many years, in professional publishing, and latterly running Amolibros as a consultant, helping authors who want to self-publish.

Salome’s Daughters took a year to write and twenty years to decide what to do about it!

She has written a number of articles but this is her first novel. In her spare time she enjoys her dogs and cats, her garden, tennis, and walking on Exmoor.

Katharine D'Souza will be visiting libraries across Birmingham next week to talk about the story of and issues behind her latest novel, Deeds Not Words. 100 years ago, suffragettes in Birmingham were campaigning for women to be given voting rights. In this novel, a modern day woman is forced to assess if she's prepared to stand up and fight for the issues she believes in.

Katharine will be at Northfield Library on the 12th May, Hampstead House in West Heath on the 13th May and Sheldon Library on the 15th May. More details are available on the Library of Birmingham website.

As with her previous children’s books Karen worked with her Bosnian illustrator, Damir Kundlic, to the produce fun black and white illustrations throughout.

Karen says: “Henry Haynes is a chapter book that’s aimed at early readers from age 6 as well as any child up to age 8 who’s looking for fun, a short page-turner. It’s already received a huge thumbs up from Year 1 & 2 children at a school I visited for World Book Day, where I was able to read an advance extract and show them some of the illustrations!”

Order Henry Haynes and The Great Escape from Amazon.

The Confessions of Becky Sharp is now available on Kindle with a new print version in the offing.

Note Becky's wearing a new gown for the occasion of her summer launch on Quagga.

She loathed the original portrait on Pegasus, throwing her silver-handled hairbrush at it and smashing the glass. 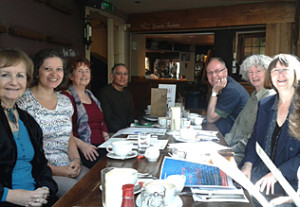 The weather was excellent last Saturday (3rd) in Stratford-upon-Avon when a number of ALLi members got together for the second ALLi West Midlands Meetup. Twelve people attended, five of whom were ALLi members.

The get-together was promoted as a chance to find out more about ALLi and self-publishing as well as to meet fellow Alliance members, so the range of experience was quite wide. Some people were just starting to think about independent publishing while most of the ALLi members were further along the road.

We started off by introducing ourselves and because there was so much to say about publishing, that took quite a while! Topics discussed during the meeting included ALLi membership and benefits, cover design, marketing, particularly Facebook and Twitter, and the value of building local connections to promote our work.

A number of people stayed on for a good lunch and at least two people were planning to attend a Stratford LitFest event that evening. It was great to be able to meet fellow ALLi members in person and discuss a number of the key issues. We’re looking forward to the next meeting already. 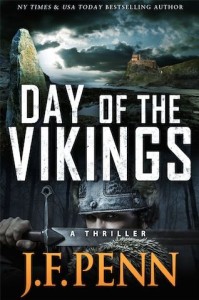 Day of the Vikings. A Thriller novella out now from New York Times and USA Today Bestselling Author J.F.Penn.

A ritual murder on a remote island under the shifting skies of the aurora borealis. A staff of power that can summon Ragnarok, the Viking apocalypse.

When Neo-Viking terrorists invade the British Museum in London to reclaim the staff of Skara Brae, ARKANE agent Dr. Morgan Sierra is trapped in the building along with hostages under mortal threat.

As the slaughter begins, Morgan works alongside psychic Blake Daniel to discern the past of the staff, dating back to islands invaded by the Vikings generations ago.

Can Morgan and Blake uncover the truth before Ragnarok is unleashed, consuming all in its wake?

Day of the Vikings is a fast-paced, action adventure thriller set in the British Museum, the British Library and the islands of Orkney, Lindisfarne and Iona. Set in the present day, it resonates with the history and myth of the Vikings.

Available on all ebook stores. More info and buy links.

“Bereaved biographer Alex Forbes goes to war-ravaged Croatia to research the life of celebrity artist Zenobia de Braganza and finds herself at the centre of a family conflict over a disputed inheritance. At the Kaštela Visoko Alex uncovers a mutilated photograph, stolen letters and a story of indeterminate gender, passion and betrayal.

But can she believe what she is being told? In order to discover the truth about Zenobia, Alex travels to Istria, Venice, New York and London and, in working through the narrative of Zenobia’s life, Alex begins to make sense of her own and finds joy and love in a new relationship.”