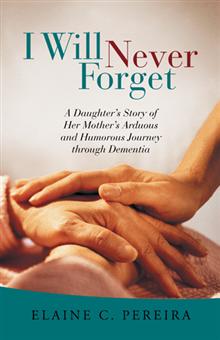 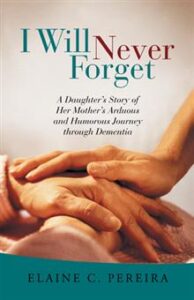 My mother’s is a story that needed to be told. She was a kind, brilliant and talented woman all of her life until dementia took hold distorting her persona and leaving an agitated, bewildered and compromised person in its wake.

I Will Never Forget is her powerful, almost unbelievable were-it-not-true journey through the mystifying haze of Dementia laced with superb anecdotes, intriguing escapades, humorous vignettes and finally a stunning rally to take control of her own destiny.

Despite the arduous physical and emotional challenges of our journey together, my memoir is heartwarming not morose. It offers simple techniques for maintaining a calm relationship with someone whose reality has dissolved and is anything but real, without being a dry how-to book.

I am humbled and honored to have been able to give back to the woman who gave so much.  I Will Never Forget.

A native of Kalamazoo, Elaine Pereira and her husband Joseph live in South Eastern  Michigan with their two big dogs Maddee and Bailey and Snoopy the cat. Together they have five adult children and five young grandchildren. 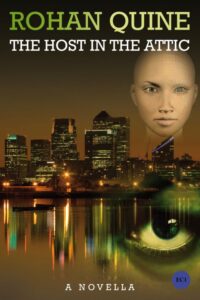 I’m glad to receive Jane Dixon-Smith’s crisply sinister-looking cover design for my upcoming novella The Host in the Attic.

Her design style for it follows on from the cover of its sister novella The Platinum Raven, which was revealed here in Showcase bulletin #40 . Both will be published early in the new year—first as separate ebooks (stand-alone novellas being increasingly popular), and then within a paperback comprising four novellas together.

Continuing the visual theme of glitzy skyscrapers at night, as established in that previous tale’s cover image of Dubai, this cover for The Host in the Attic shows the towers of Canary Wharf here in London, including the Ontario Tower whose obliquely-slanted top is one of the novella’s main settings.

The Host in the Attic constitutes a hologram of Oscar Wilde’s The Picture of Dorian Gray, digitised and reframed in cinematic style, set in London’s Docklands in a few years’ time. More info soon, but meanwhile a few tasters are on my website.

I’m also most grateful to a certain Amazon UK “Top 2,000″ reviewer, ALLi’s own Debbie Young, for her beautifully thoughtful and receptive review of my novel The Imagination Thief, on her blog “Young By Name”.

I’m a lucky boy to receive her perceptive and extremely well-read attentions, which have added Dr Samuel Johnson’s Rasselas to my reading list…

For the Triskele Books CHRISTMAS PROMO!

Grab any Triskele eBook for only 99 cents

Details on our blog

And a very Merry Christmas from the Triskele girls!

Self-publishing author Marisha Pink has teamed up with 26 of the UK's independent bookstores to give away copies of her debut novel, Finding Arun, this Christmas.

The original campaign will see over 50 books gifted to readers through the ‘Arun Advent' app, a digital advent calendar for iPhone and iPad, developed in partnership with iMobilize Ltd.

The advent calendar's windows each conceal a clue pointing to an independent bookstore where a signed paperback copy of Finding Arun has been hidden. To win, readers must simply guess the location of the bookstore and, if they are first to reach the store, they can claim the free book for themselves. Stores are participating in London, Bristol, Manchester, Birmingham, Liverpool, Bradford, Nottingham, Sheffield, Brighton, Leicester, Edinburgh, Glasgow, Cardiff, Swansea and Dublin.

Valerie Smalley, owner of Tin Drum Books in Leicester, said “It's great to see an author who is promoting her own work with such enthusiasm and skill. It is good for her and good for us and all bookshops need a boost just now. I hope she will start a trend.”

To internationalise the giveaway, a second clue will also point readers to different pages on Pink's website where an image from the book's cover will be hidden amongst existing content. The first reader to post a link to the correct page on Facebook or Twitter, using #FindingArun, will win a signed ebook.

Marisha Pink said, “I wanted to do something fun and festive to promote Finding Arun and I'm thrilled that so many stores agreed to partner with me. Nothing can replace the feeling of holding a book in your hands and bookstores will always have an important role to play in that.”

For several months I’ve been hoping to get a friend to make a little video for YouTube as an ad for my book Burning Bright. I thought it would be a simple matter. Fool!

Turned out the real problem was not making the video, it was getting all the people together… in the same place… at the same time. And whew… it’s happened at last.
It was supposed to be two kids doing a home rock concert. Very home-video, very low tech, very YouTube-ey.

But they’re right about children and animals, you never know what’s going to happen. Caleb (4) and Marlee (8) decided to practice. While Marlee was singing Caleb grabbed the mic and roared.

Eventually Marlee decided that she would go ahead. By this time Caleb had found a book that he wanted to look at. Her Dad set up the iPad and in one take she’d done it. Yieeeeeeha!

Putting it on Youtube was a whole other adventure – you can read about it here. 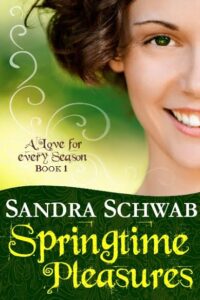 Sandra Schwab is thrilled to announce the release of the paperback edition of her latest historical romance. Springtime Pleasures is a lighthearted Regency romp featuring wild boars and highwaymen, a very unsuitable heroine, and a hero who thinks he is beyond redemption.

A “small jewel of a story”~ LoveLetter Magazin
“Sandra Schwab is definitely blooming and blossoming and I'm dying for more of her books. […] Overall, this was a cute and fun and simply adorable.”~ CaroleRae's Random Ramblings
“Springtime Pleasures is a light-hearted, captivating and well-researched book with unexpected depths. Schwab's characters are lovable, distinctly-cut personalities, the setting, Regency London, positively springs to life on the page, and the elegant yet tongue-in-cheek style is equally amusing and a joy to read.“~ Customer review on AmazonDE
Amazon UK  Amazon USA

Or enter the giveaway on Goodreads for a chance to win a signed copy of the novel. 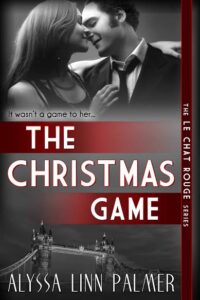 Alyssa Linn Palmer  has released a novella in her Le Chat Rouge series just in time for the holidays! The Christmas Game is $0.99 in ebook.

Alone in London on business just before Christmas, Marc Perron meets an intriguing young woman working at a bookshop. A light flirtation seems to lead nowhere, but the night before he returns to Paris, she knocks on his hotel room door.

Madelaine’s taking a risk, but no one’s ever looked at her the way Marc does, and she’s not about to pass up a chance to get to know him better. When he suggests a game of wagers, she can’t resist challenging him. And herself.

Their matchup is a fiery one and each wager tops the last, the sexual heat between them crackling. Neither want to lose the game, but Madelaine fears she might be losing her heart as well.

This novella is a part of the Le Chat Rouge series, but can be read as a stand-alone story.
Amazon     Smashwords    B&N (Nook)