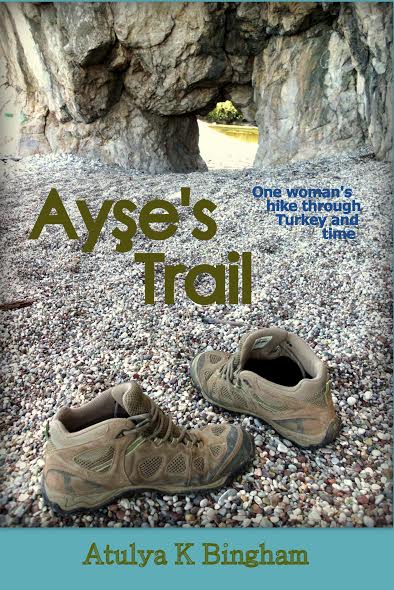 Ayşe’s Trail – One woman’s hike through Turkey and time.

Released in April 2014 and winner of the One Big Book Launch, Ayşe’s Trail is finally available on Kindle at the special promo price of £2.99. The offer ends at midnight Sunday 18th January.

One day, Ayşe, a 38-year-old mother from Istanbul, decides to tackle the Lycian Way. She has never camped alone before. As she strikes out into Lycia’s ancient forests, she is on a quest to leave behind the past and find her own truth.

But the Lycian Way is steeped in memories. Unknown to Ayşe, as she clambers over the precipices of the Mediterranean coast and through its lost cities, she is stepping into the ancient past and a forgotten civilisation.

“If you've ever been to Turkey or ever want to go, this book is an absolute must-read.” Melissa Maples, Antalya Insider 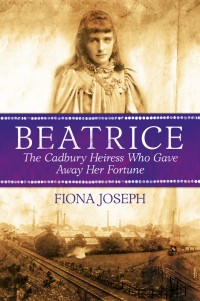 Fiona Joseph lectures for The Victorian Society on Birmingham's Notable Women on ‘Beatrice Cadbury: The Heiress Who Gave Away Her Fortune.'

In this illustrated lecture Fiona Joseph will speak about the incredible life of anti-capitalist and peace activist Beatrice Cadbury as part of The Victorian Society's Day School on ‘women who made a difference'.

Other guest speakers are: Nicola Gould on Birmingham Suffragettes, Sally Hoban on Florence Camm and Brendan Flynn on Georgie Gaskin. 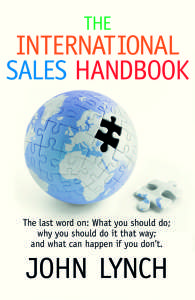 On Tuesday of this week, the Shropshire Star carried an article with that headline. You can read it here:.

Reading it in the comfort of my own home, even knowing that I’m due to get on another plane at the end of the week, I felt a little embarrassed – surely my life has not been that dangerous? And I don’t believe it has, even though it’s true that my career in international sales has taken me to some of the world’s most dangerous places.

The purpose of the Shropshire Star article was to draw attention to my book, The International Sales Handbook, as well as the fiction I write from 3 o’clock every morning until it’s time to shower, eat breakfast and get on the road again.

It was also to tell people that after forty years living and working on every continent except Antarctica I’m retiring at the end of April and launching my new consultancy, Profitable Exporting, aimed primarily at SMEs.

The fiction will be even more important in my new life than it has been to date. I’ve been delighted by the five-star reviews earned by Zappa’s Mam’s a Slapper and the nice things readers have said about A Just and Upright Man. 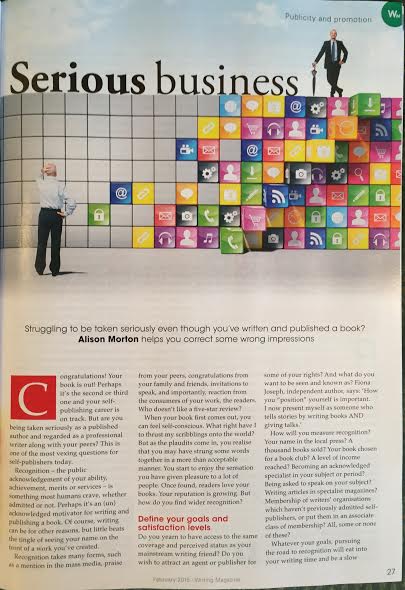 “Sometimes,” writes ALLi member Alison Morton, “self-publishing seems like the work of Sisyphus eternally rolling a large rock up a mountain only for it to tumble back to the base. I’ve learnt a huge amount in my last five years, not least from other members of the Alliance.

I put a few ideas together about what had worked for me and Writing Magazine asked me to pen a feature. Naturally, I asked Alliance colleagues for their experiences as well.

So in the latest Writing Magazine (February 2015) you'll my article ‘Serious Business – Struggling to be taken seriously even though you’ve written and published a book? Alison Morton helps you correct some wrong impressions’ Pages 27-29.

I’ve been invited to speak on a panel about self-publishing at the Historical Novel Society Conference in Denver, USA with Alliance colleagues Helen Hollick and Anna Belfrage. Geri Clouston of IndieBRAG is joining us. Now that is truly exciting!” 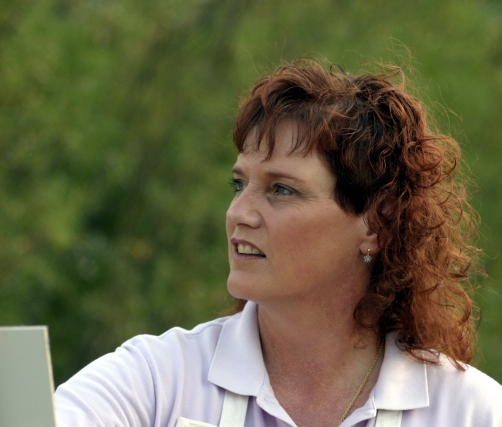 This little blog and video will help anyone who might be struggling to set objectives, goals, strategies and measurements. This tool has been used by corporations for decades to focus their organizations on objectives and goals which brings success.

It was first introduced to the auto industry, but other industries adapted the tool for their use. In the video I show how this tool can be used and you can actually pause it to work on each section. The video takes about seven minutes to watch without pausing.

Let me know if you have any questions.

I’m happy to announce the release of Steamrolled in four parts. This is the last of my big novels in my Project Enterprise series that I’ve broken into parts for readers who like their books on the shorter side.

Breaking up the big books also allows me to make the first part of the books free, so readers can try before they buy.

I explain the breakup more here. The unbroken-into-parts novels are still for sale for those readers who like BIG books.

“Pauline B Jones has designed a rollicking time traveling tale set in a deteriorating steam punk world that will blow your mind. Crossing time, space and worlds with technology from steam-run automatons and flying airships to nanites that exist inside the body to help thought processes and healing, Steamrolled is a must read for science fiction lovers.” Single Titles
www.paulinebjones.com
iBooks   Amazon   Google Play

In late 2013, I had the idea to conduct a survey specifically designed to better understand trends in book discovery.

I fielded the survey from January to April 2014 and ultimately secured 1,289 responses. The data analysis took me longer than I had hoped, but I just finished it and published the results on my blog authordiscovery.com. It is my wish that author/publishers everywhere get access to this FREE information so they can adjust their strategies to reach readers as necessary.

Can you help me get the word out through the ALLi network? The blog post can be found here: