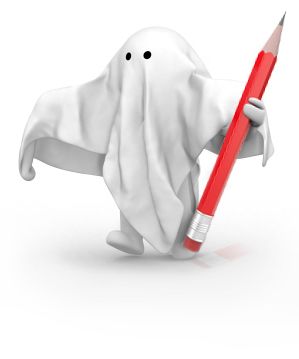 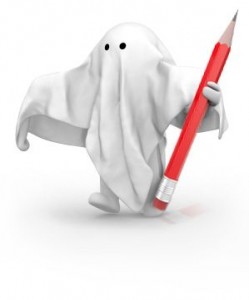 Ghostwriting might be regarded as freelance journalism’s fraternal twin, offering indie authors another outlet for their natural facility with words and an extra income stream in return for writing to someone else’s prescription rather than following their own creative muse.

In this post, ALLi author members consider one side of the equation: of indie authors providing a ghostwriting service. We’ll be revisiting the topic as part of the next Indie Author Fringe conference to discuss the other side: how indie authors can employ ghostwriters to increase their own productivity, thus boosting their income stream in a different way.

As will become clear, ghostwriting can be a win-win scenario whichever side of the deal you are on…

British author and writing coach Roz Morris sums up the role of the ghostwriter as follows:

“Lots of people use ghostwriters – it is far, far, far more widely spread than you’d think. Think of it as akin to hiring an architect. You want a house built to your specifications, but you don’t have time to learn how to build it for yourself, or to the required standard. I always say to ghostwriting clients that it’s my job to write the book they would write… if they knew how.”

Australian author and journalist Rebecca Lang concurs: “My greatest accolade to date was a high-flying senior executive telling me: ‘if I didn’t know better, I would have thought I’d written this myself!'”

The ghostwriter’s role is to write the book manuscript to the client’s brief. It may also involve defining the brief and undertaking any necessary research.

“Don’t imagine that everyone you are ghosting for is someone who can’t write,” says British author and journalist John Lynch, who has ghostwritten over 50 books. “They may also be very good writers in their own right, who just can’t turn out as many new books in a year as they are able to sell.”

Or they may be aspiring writers hoping to improve their skills through this process.

How to Get a Ghostwriting Gig

From the US, Richard G Lowe Jr recommends “The Association of Ghostwriters is a good place to start.”

Canadian ghostwriter Boni Wagner-Stafford offers this advice; “There are a number of ways you can find a ghostwriter. Referrals from your personal network, online searches, freelance work sites like Upwork. LinkedIN is a great place to find a ghostwriter. I’ve been discovered and hired from my Twitter account: one of my clients liked my content and “just had a feeling”.

British writer Chris West finds it helpful to be part of “a kind of cooperative” of 13 ghostwriters called United Ghostwriters, who share a website to promote their work.

Sometimes the work will find you. “I was generally approached via freelancer sites such as PeoplePer Hour and Elance” says British author Katharine E Smith, “or else I bid for jobs on these sites. It was something I did when I was starting out as a freelancer, along with editing, proofreading, copywriting, etc.”

John Lynch recommends assembling a portfolio of what you can do as you ghostwriting career builds up.

“You’ll need agents,” he says, “and you should be on the books of publishers who publish the kind of book you can write. There are niches for publishers just as there are for authors. With publishers, it’s particularly important to aim at the ones who specialise in your kind of work.”

Don’t expect to hit the jackpot straight away, though.

“Take what gigs you can and work up,” says John. “Do it well, sell yourself hard, and – with luck, because everyone needs luck – it won’t be too long before you’re earning a great deal more.”

Bear in mind that just because you are the invisible force behind the work doesn’t mean you won’t get any marketing value out of it. While your contract may stipulate that your name won’t be listed as author, there are other valuable alternatives. Boni Wagner-Stafford suggests being listed as a consultant, advisor or editor, or asking for a testimonial.

As with any writing task of which you are not the outright owner, there are lots of contractual issues to consider,

Roz Morris sums it up: “Briefly, you need to agree who owns what, how the payments will be made, delivery deadlines including deadlines for milestones in the project.”

It is highly likely that your name won’t appear even as a co-author on the finished book. It seems fair that, in return for anonymity, you should be better compensated financially.

Financial matters such as whether you will receive a one-off sum for writing the book or a percentage of all future royalties and right sales should be agreed in advance.

“For each ghostwriting job I’ve done, I’ve agreed a one-off payment,” says Katharine E Smith. ” The work then belongs to the person who has employed me.”

“Any commercial arrangement involving money should also involve a contract,” advises Rebecca Lang.  “This sets out clear expectations for both parties and usually involves a confidentiality clause i.e. you can’t claim/talk about creating the work. Contracts are binding and can be expensive if you break them!”

OVER TO YOU If you have been a ghostwriter and have top tips to share about how to get started, we’d love to hear them – cautionary tales, too!